The LaserActive (パイオニアレーザーアクティブ) is a video game-compatible LaserDisc player designed and manufactured by Pioneer. Released in Japan and North America in late 1993, the system features interchangeable hardware expansions known as PACs, which enable compatibility with Mega Drive and Mega-CD games, PC Engine and PC Engine CD-ROM² games, and a new type of LaserDisc-based format: Sega Mega LD and NEC LD-ROM².

NEC produced a rebranded version of the system, the NEC PCE-LD1.[2][3] 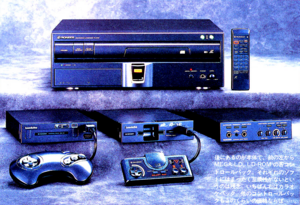 The LaserActive plays all sizes of LaserDisc media. Considered a mid-range player in terms of playback quality, inserting a Sega PAC or NEC PAC expands the hardware with advanced playback features like frame-by-frame view and multi-speed jogging.[4] The LaserActive cannot automatically switch between a disc's sides, and requires users to eject, flip, and re-insert discs halfway between most movies and software.

The system outputs in composite video (the format which all LaserDiscs are natively encoded in), and when playing video games, boasts superior video quality to both the Mega Drive and PC Engine's composite video output.

Certain games were developed to take advantage of LaserDisc media. Similar to how the popular LaserDisc-based arcade game Dragon's Lair used special technology to add an interactive layer to the video, Sega Mega LD and NEC LD-ROM² could do the same. These two formats were rebranded versions of Philips' LD-ROM format, adapted for each company's respective PAC. However, the format's generally 480i content had to be downsampled to 240p whenever developers wished to display additional on-screen graphics with their games (to match the resolution of the 16-bit hardware the format works with.)

The LaserActive is designed to be an expandable and widely-compatible system. In addition to its existing ability to play LaserDisc and LD-G formats, the system can be expanded with plug-in hardware modules called PACs (sometimes stylized as Packs.) PACs expand the system's capabilities, such as the Sega PAC giving the system the capabilities of a Sega Mega Drive and Sega Mega-CD combined, allowing for playback of additional formats such as CD-G. While PACs are generally region locked, Sega Mega LD and NEC LD-ROM² games are region free and will play on any NTSC system.

The Sega PAC allows the system to play Sega Mega Drive, Sega Mega-CD, and Sega Mega LD games, in addition to CD-G media. Like it's counterpart, the NEC PAC, it also expands the LaserDisc functionality of the system by adding advanced playback features like frame-by-frame view and multi-speed jogging.[4]

The NEC PAC allows the system to play NEC PC Engine, NEC PC Engine CD-ROM², and NEC LD-ROM² games, in addition to CD-G media. Like it's counterpart, the Sega PAC, it also expands the LaserDisc functionality of the system by adding advanced playback features like frame-by-frame view and multi-speed jogging.[4]

The Karaoke PAC allows the system to play LaserKaraoke media, and features karaoke-oriented inputs and controls.

The Computer Interface PAC allows the system to be controlled by an NEC PC-98, IBM PC DOS, or Apple Macintosh personal computer[5], by way of a custom program authored to communicate via the PAC's 25-pin serial port. The PAC is the only Japan-exclusive peripheral for the system.

Main article: History of the LaserActive.

The following is a list of LaserActive games. 34 games were published for the system, produced on Sega Mega LD or NEC LD-ROM² formats, and released in Japan or the United States.