Power Strike II for the Sega Master System is an overhead shoot-'em-up developed by Compile which acts as a sequel to Power Strike. It is not to be confused with "Power Strike II" for the Game Gear, which despite the identical name, developer and year of release, is an entirely different game, being a localization of GG Aleste II instead.

Power Strike II takes place in an alternative past, fusing 1930s aircraft with futuristic technology seen in other Compile shooters. It was only released in PAL regions.

In the early 1930s, many pilots have become sky pirates for survival after being laid off from their jobs as a result of the Great Depression. The player takes on the role of a Pothunter, a pilot of the Flying Falcon aircraft who earns a living by shooting down pirates.

. The Flying Falcon is equipped with a standard pulse beam that is fired with

The player can also collect up to two drones, which affect the strength, speed, and spread of the Falcon Flyer's main weapon.

The Flying Falcon is destroyed if it takes damage from an enemy, costing the player a life. The ship respawns after a moment, but the player loses any power-up effects after losing a life. The game ends if the player runs out of lives, but it can be continued as long as the player has continues remaining. The player gains an extra life at 20,000 and 100,000 points and then every 100,000 points after that.

The special weapon is chosen at the beginning of the game and can be changed by collecting item pick-ups.

Items are dropped by item carriers when they are destroyed and can then be collected by flying over them.

The Flying Falcon is temporarily invincible after collecting an item. 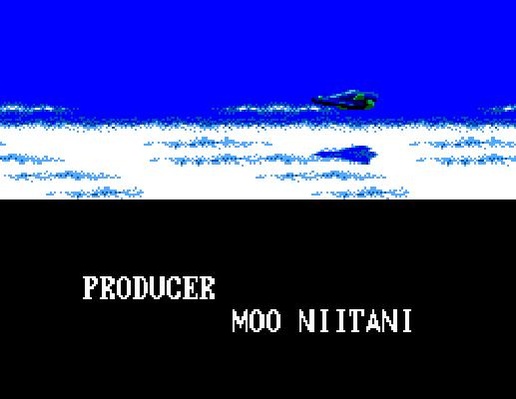