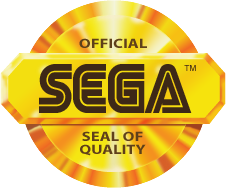 The Sega Seal of Quality was an icon that Sega put on its own video games along with certain video games published by a third party software developer. As was the case with the Nintendo Seal of Quality, the Sega seal appeared on a video game's box and marketing as a means of informing the consumer that Sega had previewed the game before its release to ensure that the game was fully compatible for its intended home console system, and had met a certain level of Sega's standard of quality (in terms of graphics, sound, challenge and possible offensive content). However, the Sega Seal of Quality was otherwise very different than the Nintendo Seal of Quality.

Sega never required a third party software developer to earn the official Sega Seal of Quality as a precondition for publication, although most developers chose to do so. Furthermore, a game could earn the seal even if it contained certain themes that its major competitor, Nintendo, would have prohibited: blood, scantily clad female villains and graphic violence. Hence, the Sega Seal of Quality was given out to Sega Mega Drive games that depicted blood (Splatterhouse 2, Techno Cop), and scantily clad females (Streets of Rage, Final Fight CD).

Video games released on a Sega home console system were still censored for other taboo or controversial depictions, i.e. profanity, nudity, prostitution, homosexuality. However, this was done by the software developer and not as a requirement issued by Sega to the developer.

In 1993, Sega of America permitted Acclaim to keep the graphic violence and gore in its port of Midway's popular arcade game Mortal Kombat. As this game and other games sparked a national controversy over the violent content in video games, Sega created the Videogame Rating Council to give a descriptive rating to every game sold on a Sega home console system in the United States of America. This rating, along with the seal, would appear on the game's box and marketing. Some Sega CD games such as Rise of the Dragon, Snatcher, and Eternal Champions: Challenge from the Dark Side took advantage of the rating system to depict or make reference to taboo subject matter.

However, the video game controversy of the early 1990s, along with the fact that Sega of America was never entirely clear on how the rating system operated, meant that few companies took advantage of the rating system to market video games to an older audience.

The Videogame Rating Council was phased out in 1994 with the adoption of the industry wide Entertainment Software Rating Board. Sega gradually shifted the scope of their seal of quality to focus less on content and more on assuring consumers that a game was fully compatible with its intended home console system. The Seal was dropped in 2000, when Sega decided to focus only on making software.