Segasa (originally founded as Sega S.A., Service Games Sociedad Anónima[4]) was a Spanish amusement company established on March 25, 1968, by Sega Enterprises, Ltd.-related shareholders. It produced coin-operated amusement machines and pinball tables, which were the only coin-op equipment legally produced in Spain at the time. 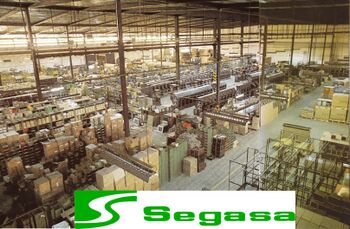 The inside of Segasa's factory in 1987

Segasa was founded by Martin Bromley[5][6] and Bert Siegel[7][8][9][10] (Bertram Leroy Siegel[11], father of Lawrence David Siegel[12], President of Atari from 1987 to 1992, of Black Pearl Software from 1992 to 1993 and COO of THQ from 1993 to 1995) in 1968 as a means of producing arcade machines for the Spanish market. Despite sharing a similar name and being associated with Sega executives, Segasa is not thought to have ever been a subsidiary[13] of Sega in Japan or the US, but is thought to have manufactured and distributed Sega's products, with Japanese designs but with parts sourced from Europe. It also exported its own games, which may have been distributed by Sega in other regions.

In Franco's Spain, gambling games ("type B" games) were not permitted, meaning Segasa could not benefit from Sega's history of slot machines and other gambling products. This law was overturned in 1977[14] during Spain's transition to democracy.

In the mid-1970s, likely in conjunction with Sega changing its corporate logo, Segasa began trading as Sonic[15][16][17] (years before the invention of Sega's mascot, Sonic the Hedgehog), sometimes under the full title of Segasa d.b.a. Sonic (doing business as). It was during this time that Segasa signed distribution deals with other US and Japanese firms (such as Williams, Atari, Inc.[18] and even Nintendo[18]), bringing further titles to Spain. Seeburg would acquire a 50% stake in Segasa in 1973[19].

Segasa was also one of the few active video game companies operating in Spain that went out of its way to obtain official licensing agreements[18]. At the time, it was more common to see unauthorised bootleg arcade boards, and for many years these grey markets competed directly with Segasa. Initially attempts were made to localise games for a Spanish audience, though many later games were left as originally intended.

During the 1980s Segasa introduced the "Video Sonic"[20][21] concept - a standardised arcade cabinet with interchangable parts, allowing new arcade games to be hooked up without needless extra cost. By the 1990s virtually all game Spanish game production had ceased, with Segasa's main business being the importing and rebranding of arcade games for these Video Sonic cabinets.

In 1994 Segasa became wholly owned by Spanish shareholders. As the decade drew to a close and more elaborate arcade cabinets were becoming more commonplace, Segasa moved into the gambling sector, but with the advent of the Euro[32] and due to fierce competition of rival companies, like Cirsa and Recreativos Franco the company was relegated to a modest third place, obtaining only 15% of the market[32], wenting into court-appointed receivership on March 2nd, 2005[33] with a debt of €371.920,59 before closing its doors in 2006.