Shove It! ...The Warehouse Game

Shove It! ...The Warehouse Game, called Shijou Saidai no Soukoban (史上最大の倉庫番) in Japan, is a version of Sokoban for the Sega Mega Drive by NCS.

Romu, a warehouse keeper, fells in love with a blonde woman, but she enters in a sports car instead of Romu's beetle car.

Now, he must work hard in order to get enough money to by a sports car to get her.

Stevedore, a warehouse keeper, is shoving boxes to earn him money to make his dreams come true: a lovely girlfriend and a fiery red sports car. 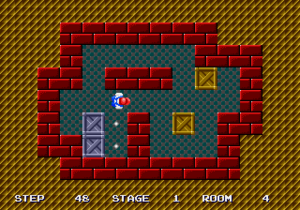 The game consists of 16 stages with 10 rooms each. At a certain stage, any of the 10 rounds can be selected while playing but a new stage will only be opened up when all rounds have been successfully completed. To complete a round, Stevedore needs to push all boxes on the designated spots. This will turn them into a different color. This is no easy task as the level design will obstruct many moves and cornered boxes can no longer be moved. While playing it is possible to restart the round, undo the last step and the game keeps track of the number of steps taken.

Players can back up their previous move with

in play, and use the D-pad to move Stevedore.

to replay their moves up to the last move before opening the menu, and Go allows the player to choose from level x+1 to x+10.

Shove It! features an Edit Mode, which allows players to make their own puzzles to stump family or friends. While the option is definitely useful, it is limited by a number of factors (no battery backup or password to save level designs, no error-checking for impossible puzzles). 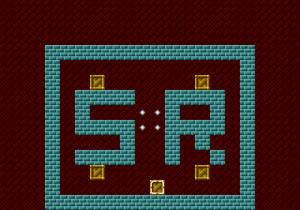 In the Edit Mode menu, select EDIT to edit your puzzle. Note that you will begin with a "clean slate" of red brick background. You are limited to the "basic" graphics in this set (turquoise brick walls, brown boxes that turn light blue on a dot), and you can only use the "small" graphics, giving you a playfield 20 units wide by 14 units high. Your cursor is the white square that starts off in the upper-left hand corner of the screen. You can move the cursor with the D-pad, and note that if you scroll the cursor off one edge of the screen, it will appear on the opposite side (e.g., scroll the cursor off the left edge of the screen, it will appear on the right.)

You can select different "pieces" to build with by pressing

. The chosen piece will be displayed in the center of the cursor. The pieces appear in the following order: background, dot, wall, box, box on dot. To place that piece on the board, press

and move the D-pad to keep placing copies of that piece on the board as you move. Note that you must place a box on dot by using the box on dot option; you cannot first place a dot, then place a box on that dot, because it will just turn into a regular box. Pressing

will automatically return the cursor to background and erase whatever is underneath the cursor; hold down

and move the D-pad to keep erasing whatever is underneath the cursor as it moves.

When you've finished creating your puzzle, press  START  to return to the Edit Mode menu, then select PLAY to play your puzzle. You will first have to select Stevedore's starting point by moving him and pressing

; note that Stevedore can be placed inside a solid unit, such as a wall or box, at the start of a game. (His first move, however, must be either to an open space, or moving a box adjacent to his starting location.) From here the game will function much like a regular game of Shove It!, only without the Step, Stage and Room details at the bottom of the screen. The only other difference is that pressing Start will exit from the puzzle at any point, back to the Edit Mode menu. Whenever the puzzle is solved, the game will automatically exit back to the Edit Mode menu.

When designing puzzles, it's important to keep in mind the components you've already learned in the game: circuits, order of placement of boxes on dots and so on. Note that the game does not automatically error-check, so it is entirely possible to create an impossible board and not know it. If you place more dots than boxes on the board, the puzzle will be considered solved when each box is on a dot; if you place more boxes than dots on a board, the puzzle will never be considered solved, even when each dot has a box on it. Also note that Stevedore cannot scroll off the edge of the screen, so the 20-by-14 boundary of the playfield acts as a wall of its own.

Shove It! ...The Warehouse Game