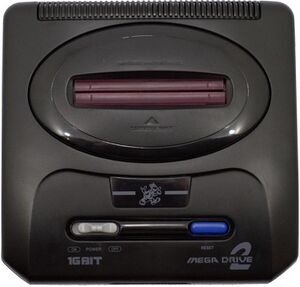 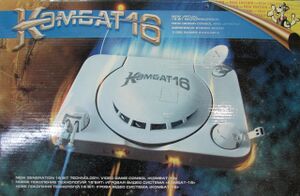 I swapped from looking through Russian auction sites to Ukrainian ones, and this flavour of Mega Drive 2 (and Kombat 16 and Mega Drive One) show up more often. I think they were all sold by the same company - a Ukrainian company. 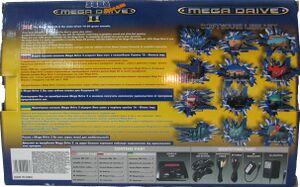 The text on the back of these boxes is in English, Russian and Ukrainian. Russian is spoken in Ukraine (see: ongoing conflicts in the east), but I can't see products made for Russia bothering to offer Ukrainian translations, given that they tried to ban the language back in the day.

So... Ukrainian clones rather than Russian ones? (also bonus points if you wan work out who was selling these things - the logo/mascot is everywhere but tracking down its origins is proving tricky) -Black Squirrel (talk) 14:23, 10 July 2019 (EDT)

I was able to find model numbers and a credit to "Kin Wai (Hong Kong) Investment Limited". They're all ZW numbers... which means they probably came from Zoga - a page I made once without really understanding what was going on.

I suspect it's a Hong Kong company outsourcing production to mainland China, and then selling in Ukraine. -Black Squirrel (talk) 17:09, 10 July 2019 (EDT)