Whip Rush, called Whip Rush: Wakusei Voltegas no Nazo (ウィップラッシュ 惑星ボルテガスの謎) in Japan, is a Sega Mega Drive horizontal shoot-'em-up developed by VIC Tokai. Published in Japan by Sega in May 1990, it was later published in the United Stated by Renovation Products in October that same year.

In the 22nd century, mankind has drained every planet in the Solar System of its natural resources. Three Alpha-type robotic spaceships left the overpopulated Earth on a mission to find similar planets to colonize. After five years, the pilots reported finding a similar planet they learned was called Voltegas (Voltegeus in the US version), but upon approach, their transmission was lost and the ships never re-established contact. Less than a week after the discovery, a massive alien vessel materialized in the vicinity of Mars and started attacking the Earth. It is now up to Earth's smallest but most powerful spaceship, the Whip Rush, to stop the invasion of the Voltegians and discover the fate of the missing colony ships.

The game is a side-scrolling shoot-'em-up. Stages scroll mostly horizontally but also include vertical segments. The player must battle enemy forces and ultimately a boss at the end of the stage. The stage design emphasizes maneuvering the Whip Rush around obstacles. The Whip Rush can move in any direction using the D-pad and fires with

. The weapon has rapid-fire. The Whip Rush's movement speed can be adjusted with

; the current speed is shown in a meter at the top of the screen.

The Whip Rush starts with a basic weapon and can be equipped with new weapons, which are collected from capsules found in each stage. Weapons are upgraded up to two times by collecting the same weapon icon successively. The weapon level is maintained but not increased when changing to a different weapon. Additionally, the Whip Rush can find Power Claws, which are support drones that follow it and mirror its fire. The Power Claws have two positions, above and below the Whip Rush and to the left and right of it, which are rotated with

. The Power Claws are invulnerable and can be used to ram enemies by holding

. Ramming the Power Claws sends them in opposite directions along the vertical or horizontal axis depending on their orientation, which is an effective way to deal with enemies at angles that the Whip Rush cannot directly attack with its standard armaments.

The Whip Rush takes damage from enemy fire or by touching enemies, obstacles, or terrain. If it has a power-up weapon equipped, it loses it and reverts to the starting weapon. If it takes damage when the starting weapon is equipped, the Whip Rush is destroyed and the player loses a life. The game ends if the player runs out of lives, but it can be continued if the player has credits remaining. The number of lives that the player starts with depends on the difficulty level (Easy, Normal, or Hard). The player gains an extra life at 50,000 and 100,000 points and every 100,000 points after that.

The color of the Whip Rush and Power Claws changes to indicate the currently equipped weapon. 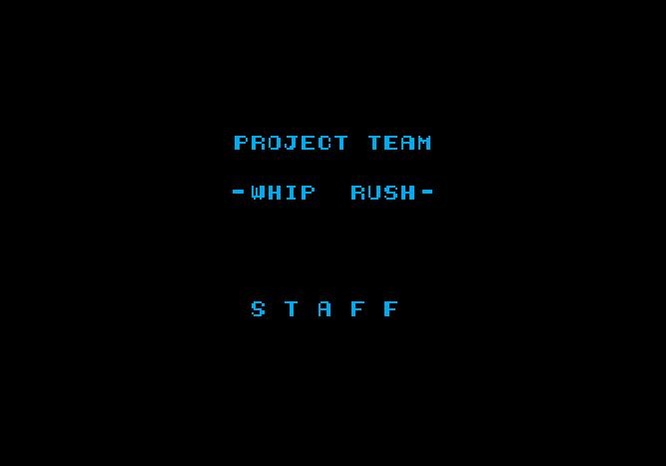