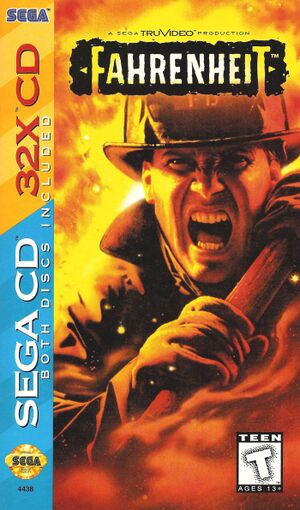 Despite manufacturing games for both the Sega Mega-CD and Sega 32X Sega Mega Drive add-ons, a few developers attempted to get the best of both worlds, creating Mega-CD 32X games (Sega CD 32X in the US), utilising the hardware behind both add-ons.

The confusion with having so many platforms on the market, coupled with the fact neither add-on was a successful as planned, meant that only six Mega-CD 32X games were made, all of which were enhanced remakes of existing Mega-CD FMV titles. The combined benefits of high quality graphics and high quality sound made these games more comparable to the Sega Saturn, though the mix-match of add-ons did not share the same level of success as it was extremely expensive to own all three pieces of hardware. Even fewer titles made it outside of North America.

With the exception of Fahrenheit which was distributed in a Sega CD box along with its Sega CD version, all Mega-CD 32X games were sold in cardboard boxes in North America, sharing the same yellow colour scheme as the 32X. In Europe, they were bundled in jewel case quad cases, identical to their Mega-CD counterparts but with the 32X black/purple packaging. No Mega-CD 32X games were released in Japan as the focus had already shifted to the Sega Saturn (consequently the Mega Drive was effectively dead, despite all three pieces of hardware continuing to receive games through 1995/96).