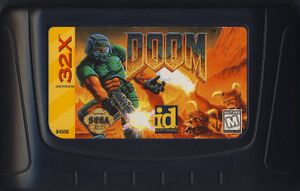 Doom on the 32X is often criticised for being rushed due to the quality of its soundtrack.

The Sega 32X was not a very successful add-on but it did see many video games added to its library. Despite heavily marketing the 32X's 3D capabilities, most games were 2D, and many were simply updated Mega Drive or Mega-CD games. Several games, such as Space Harrier, were also taken straight from the arcades, so the system did not receive many exclusives.

Being the brainchildren of hardware staff at Sega of America, North America got the most games, with Europe in a close second and Japan receiving only 18 games (five of which were third party; one of those being the only Japan-exclusive 32X release). All Sega-developed 32X titles were released internationally.

This category has the following 12 subcategories, out of 12 total.

The following 37 pages are in this category, out of 37 total.