Primal Rage (プライマルレイジ) is a 1994 arcade fighting game by Atari Games. The following year the game saw ports to the Sega Mega Drive, Sega 32X, Sega Game Gear and Sega Saturn, amongst other platforms, developed by Probe Entertainment and published by Time Warner Interactive, with the exception of the 32X version which, like T-MEK, was strangely published by Sega instead.

The Japanese Saturn release is notable for being the only port of that time to be released under the Midway Manufacturing name, as Time Warner Interactive was absorbed into Midway's home division a few years prior. Said version removes any mention of TWI outright.

A Sega Mega-CD 32X version was planned[7], but cancelled.

A Meteor strikes the Earth and causes the continents to shift into the shape of a dinosaur skull breathing fire in an event known as the "Great Cataclysm". Sleeping giants of long ago are awakened from their slumber by these events and become gods for humanity to worship. With old Earth in ruins, humanity now sides with one of six gods and one goddess. From the ruins of old Earth comes the birth of New Urth. (That is indeed the correct spelling for this word in game: Urth.) Now, five dinosaur gods and two great ape gods fight to rule the New Urth. Conquering the others' lands in the total conquest for world domination.

Home console versions of Primal Rage debuted on the 25th August 1995 in the US (backed by an $8 million USD marketing budget)[4] and Europe[7]; dubbed "Primal Rage Day" by publishers Time Warner Interactive. Across all platforms (Mega Drive, Game Gear, Super NES, Game Boy and PC), 1 million copies were sold worldwide on launch day[18], with higher-end machines (including the 32X and Saturn) having to wait until November 14 for their launches[4].

For subscribers of the US Sega Channel, as a "limited" version of Primal Rage was made available between the 1st and 24th of August, with the full game being made available for 24 hours on the 25th. On the 26th, a different build of the game was put up, which if completed would present players with an 800 number which could lead to players receiving prizes [18]. 24% of subscribers took part in the event[18].

The Mega Drive version of Primal Rage was handled by Probe Entertainment, who had previously produced similar conversions of Mortal Kombat II for home consoles (including the Mega Drive). It is based on version 1.9 of the arcade game.

While Primal Rage on the Mega Drive retains all of the moves from the arcade version (albeit sometimes in slightly altered forms), in order to fit the game onto a 32 megabit (4MB) cartridge, the number of frames of animation were cut drastically. Sauron for example went from 943 frames in total, to around 180[19].

The 32X version builds on what was seen on the Mega Drive, though uses the new hardware to deliver more colourful character sprites and more arcade-accurate backgrounds (powered by the Mega Drive, but without the need to reserve colours for elsewhere). Sound effects are also improved.

In this version, the "Okay Right? cheat is removed from the cheat menu.

On the Saturn, Primal Rage is far closer to its arcade counterpart, but still makes sacrifices to better suit the hardware. Some frames of animation are missing, as are certain sound effects, and differences in horizontal screen resolution result in slight changes to sprite sizes (the arcade has an internal resolution of 336x240, while the Saturn version opts for 352x240). The Saturn version (as well as its PlayStation counterpart) add a full motion video introductory sequence.

The Mega Drive port isn't one of the better ports of the game. While most of the combos from Arcade version 2.3 were carried over, the port is more based upon the older Arcade versions 1.9 or 1.7. This means each character has only two fatalities since the 2.3 fatalities aren't there. Attacks exclusive to version 2.3 were also not included. Also, Talon's Shredder Fatality does what it did in the older versions of the Arcade game. Rather than leaving the opponent standing all mangled and cut up like in Arcade version 2.3, blood just flies everywhere like in the older Arcade versions 1.7 or 1.9. The sprites were scaled to fit the limitations of the Mega Drive hardware, which is often met by harsh criticism. The Color Palletes are also limited as well. Combos work much like that of the 2.3 version but there are some differences. Diablo's Fireball fatality is different than his Arcade rendition. Instead of firing a gigantic but pixelated fireball at his opponent like in the arcade, Diablo fires three small fireballs at the opponent and they spin around the opponent frying them.

Although the Mega Drive port had it's problems, it had some exclusive features and an exclusive Easter Egg. The main exclusive feature was to be able to customize the six button controller in options to allow two of the buttons to use one of the character's special attacks. There are three special attacks for each character available on the options to choose from but the player can only play with two at a time on the six button controller. The Easter Egg exclusive to the Mega Drive version involved going to the cheat menu and selecting the option "Okay Right?", then selecting Diablo to play as. Diablo's worshipers would be replaced by a devil with a picture of one of the developer's heads on it. The devil will bounce up and down at the end of the battle regardless if Diablo wins or not.

The Mega Drive version was also controversial. There were reports of the game being removed from the shelves of some stores after a mother caught her 11 year old son playing Primal Rage and executing Chaos' Golden Shower Fatality (which is where Chaos urinates on the opponent with urine so acidic that it melts away the opponent's flesh leaving only the bones.) The mother was so disgusted by this that she not only returned the game but launched a "grass roots" campaign that caused the game to be removed from some stores at various locations, regardless of what system it was on. Even the SNES version which had this fatality censored on it was also removed from store shelves.

The game had to be severely watered down in order to be successfully ported. Only some of the moves and combos are present. Each character has only one fatality and Vertigo was excluded from this port. Most of the changes for this port are identical to those of the Game Boy Version of Primal Rage. However, unlike the Game Boy version of Primal Rage which had Golden Shower replaced with a new acidic puking fatality for Chaos, the Game Gear version still had Golden Shower in it. In addition to that, the Game Gear version was in color (albeit less colorful than some of the other versions though.).

drx of hidden-palace.org released an alpha build of the Sega Saturn port of Primal Rage in May 2010. 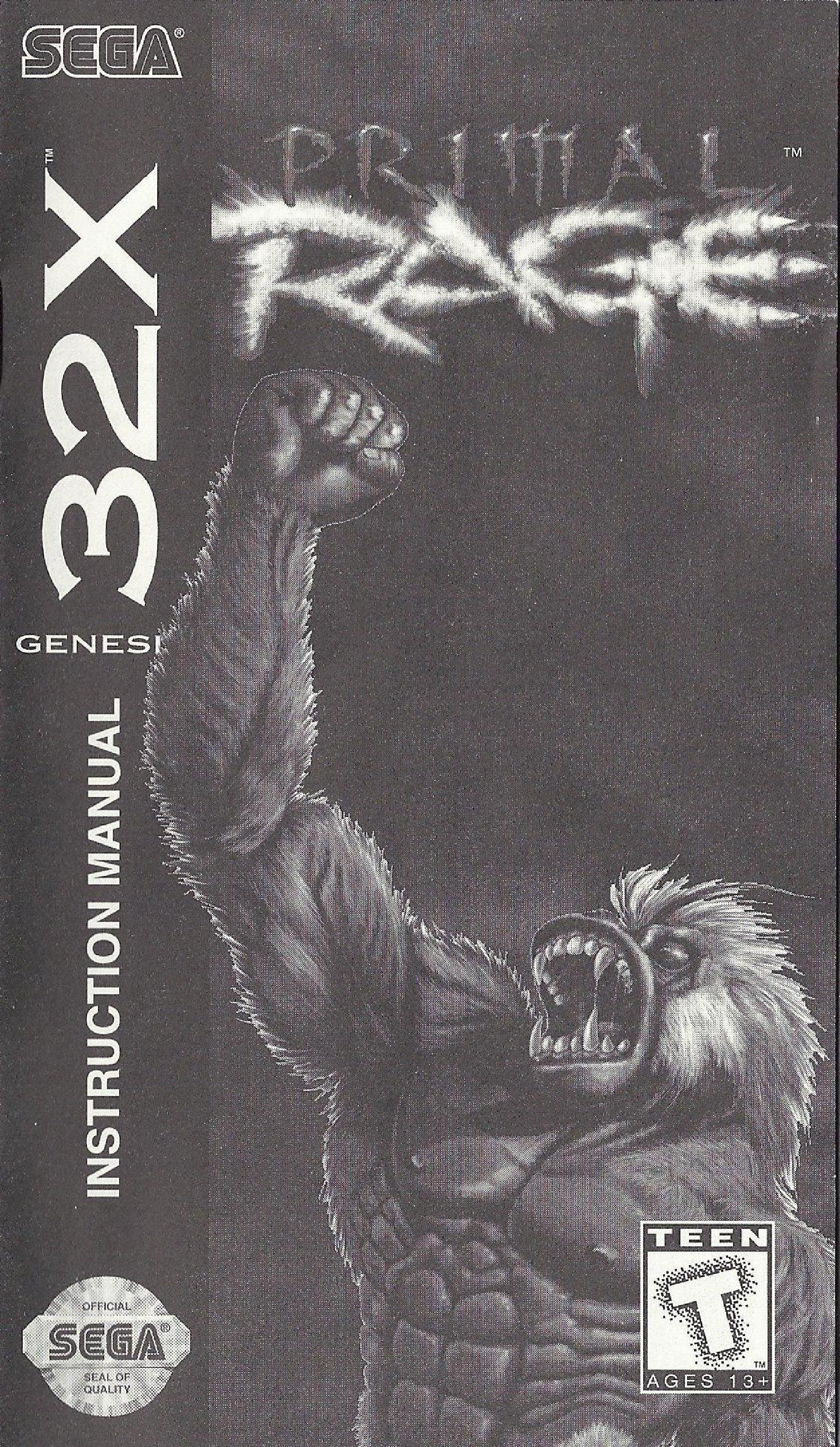