David Perry is an Irish video game programmer and designer[1], and founder of American developer Shiny Entertainment. Known for his numerous contributions to the game software industry, and for his particular style of direction-driven camera control in his various Sega Mega Drive games, Perry has become one of the Western game world's more recognizable celebrity developers, and has remained working in the game industry (most notably co-founding game streaming service Gaikai in 2008.)

Born in April 1967 in Lisburn, Ireland, Perry has always had a fascination with video games. Beginning coding as a bedroom programmer at a very young age, he was already authoring his own computer software instruction books by 1982 (when he was only 15 years of age), and coded a number of small ZX Spectrum titles. His very first game, a driving title featuring indistinct black blobs avoiding one another, was sent to a home computer magazine which proceeded to actually publish it. After sending them a few more games, the magazine awarded him with a check for £450 - while delighted, Perry was only a teenager at the time, and initially had no bank account with which to cash it.

Perry continued to code his own games until offered a paid programming position: a £3,500 a year role as an apprentice game developer, working under veteran programmer Andy Lawrie. Lawrie would end up as one of Perry's biggest influences, teaching the young programmer to solidify his passions into something he could eventually build a business upon, and instilling a sense that successful businesses are both run personally and aren't afraid to branch out into multiple projects at once.

Perry moved to London, England at the age of 17 to accept a job at developer GameTek, where he was thrust headfirst into the video game industry. Cutting his teeth at the small developer, he later moved onto a larger and more notable company, Probe Software. Perry quickly became good friends with Probe head Fergus McGovern, and gained a considerable amount of experience working for the British development company. 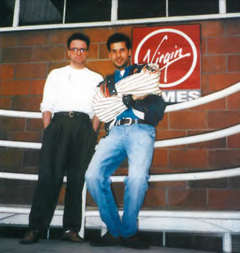 David Perry and Christian Laursen at the offices of Virgin Games USA.

After moving to California in 1991 to work for Virgin Games USA, Perry quickly settled into his new position and was able to really begin leaving a mark on the gaming landscape, developing a number of award-winning and high-profile third-party 16-bit games, including the critically-acclaimed Disney's Aladdin. Perry's work had a profound impact on both the studio's success and reputation, and he soon found himself as one of few Western video game developers whose name was recognized by the gaming public.

While David Perry departed Virgin Games USA in 1993, the company continued to release games based on his code, like RoboCop Versus The Terminator and The Jungle Book, as well as the critically-acclaimed flagship Mega-CD game The Terminator.

While satisfied with his time at Virgin Games USA, Perry wished to have more direct control over the future of his work and legacy, and in October 1993 left Virgin to form his own independent video game development company: Shiny Entertainment. Based in Laguna Beach, California, the small studio began developing an original property based around a lowly earthworm who finds himself in control of an anthropomorphizing power suit - what would later become the Mega Drive action platform game Earthworm Jim. Critically-acclaimed and commercially successful, Earthworm Jim quickly became Shiny's most recognizable game, and its popularity provided the momentum for a highly-lauded sequel, Earthworm Jim 2, and the establishment of an eventual video game franchise.

The company's continued success drew the attention of investors looking to acquire the profitable studio, including offers by both Nintendo and Sony to become an exclusively second-party developer for the Japanese developers. However, Perry instead decided to sell Shiny's acquisition rights to Interplay Productions in 1995, with Shiny retaining their own identity, management, and most of its former independence. Still, about half the studio decided to leave upon hearing the news, and through the leadership of former Shiny employee and claymation artist Doug TenNapel would later establish the nearby game development company The Neverhood. During this time, Perry also established a "no sequels" policy, ensuring that new games developed by the company would be first associated with Shiny Entertainment before they were associated with an existing franchise.

Shiny's next high-profile video game was the 1997 first-person shooter game MDK, the company's first personal computer game. Developed with the same self-aware humor present in Earthworm Jim, MDK also went on to achieve critical acclaim and commercial success. Most notably, Perry had the game pre-installed on every first-generation Apple iMac sold, ensuring the name Shiny Entertainment continued to grow in its exposure to the gaming public.

David Perry visits with an Earthworm Jim fan[n 1] on a tour of Shiny Entertainment.

As the company's President, Shiny Entertainment provided Perry a means to work in a hands-on way with his company and creations, something he had sought to do from the very start. The programmer even sat in for a college course for payroll management so he could better understand exactly how companies manage their payroll - eventually used the knowledge to manage the entirety of Shiny's pay systems solely by himself. During this time, he also attended photography classes for similar reasons, and developed a notable skill for public relations, continuing to seek as much of a direct role in Shiny's success as possible.

While Shiny was experiencing relatively productive business, their parent Interplay Productions had encountered significant financial troubles, and in April 2002 sold Shiny Entertainment to Infogrames for $47,000,000. While initially proceeding much like Interplay's acquisition, with the studio able to retain a notable degree of independence, nevertheless Perry soon ran into issues: upon pitching an original game concept to the parent company (an undeveloped game titled Plague), Perry was informed that he would have to significantly downsize the project's scope for it to even be approved. Feeling his control over his company diminishing, Perry formally left Shiny Entertainment on February 16, 2005. With the studio's recognizable head now absent, Infogrames (now known as Atari) was free to downsize the company, firing 20% of Shiny's staff and selling off all of its internal studios.

After Perry's departure, he retired from direct involvement in the game industry to act solely as a consultant and investor for his newly-founded companies GameConsultants.com and GameInvestors.com. Soon after leaving, and after Atari's lack of funding resulted in Shiny's significant downsizing, Perry offered to find Atari a buyer for Shiny, but was told that it was already being handled. After no acquirement agreements were made for some time, Perry later received a call from The Collective offering to buy the company. Surprised over being mislead by Atari, Perry accepted the offer, and soon Shiny merged with The Collective (who retained its name post-merger) and the resulting company moved into new offices headquartered in Irvine, California.

Perry founded video game streaming service Gaikai in November 2008, an online cloud gaming company which runs video games on the company's servers, streaming the video to the player while responding to their inputs with as little lag as possible. He originally ran into some difficulty marketing the service, as such an idea was relatively novel, and Perry initially found its significance was difficult to communicate to investors.

First launching its services in late 2009, Gaikai soon attracted the attention of a number of large technology companies, and Perry entertained a number of offers for acquiring the company before settling on Sony, who officially acquired the company in July 2012 for $380,000,000. As opposed to his previous two acquisitions, Perry felt much more confident in Sony's purchase, as he believed in both the company and the its reputation for quality (both in their business and the quality of their product.)

Perry left Gaikai in July 2007 to join GoVYRL, a technology company where he builds systems for brands to reach their social media influencers.

While working at Virgin Games USA, Perry would largely refine his particular style of camera control. Meant to address the issue of player characters being too close to the edge of the screen during gameplay (and therefore having less reaction time to avoid upcoming hazards), Perry sought to solve the issue by keeping the camera focused on the space directly in front of the player character, and by not keeping the character directly in the center of the screen. When the player faces the character a certain direction, the camera will snap to the direction faced and keep the area in front of the character visible. While designed with the best of intentions, the camera system is also known for its jerky movement during precise platforming, as making quick adjustments to the character's direction (while jumping, for example) will rapidly whip the camera back and forth in the pressed directions and cause a slightly nauseating effect. 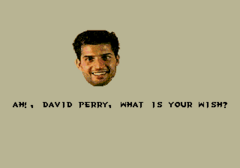 David Perry's cameo in the debug menu of Disney's Aladdin.

David Perry makes a number of cameo appearances in the games he developed, with his name often appearing in their respective debug screens, and most notably as a digitized photograph of his head in the debug menus of the Sega Mega Drive games Cool Spot and Disney's Aladdin.