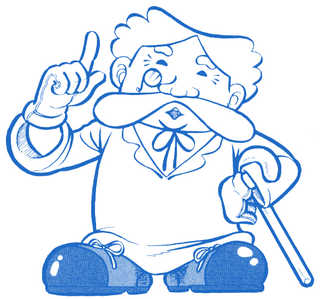 Games Hakase (ゲームズ博士), or Dr. Games is a character invented by Sega, acting as a temporary replacement for Professor Asobin in 1984.

Like his predecessor, Games Hakase was printed towards the back of SG-1000 manuals, giving short pieces of advice to players. He is a short man with moustache and a walking stick, who wears a monacle and a string bow tie. Unlike Asobin, the character was never officially drawn in colour.

Games Hakase was retired just months after his debut, with Professor Asobin returning for Sega Card and early Sega Mark III games. The concept of a character giving gaming advice had been removed completely from Sega manuals by 1988, and both characters would rarely be seen for the next 30 years. Games Hakase was never printed in any manuals released outside of Japan, though in more recent times, he has re-emerged as an obscure Sega icon, appearing in limited runs of merchandise.