The Ninja (忍者) is a Sega Master System run-and-gun game developed and published by Sega. A redesigned port of the 1985 Sega R&D 1 arcade title Ninja Princess, it was first released in Japan and Europe in November 1987, and was later brought to the United States the following month.

The game is set during Japan's Edo period. The ninja Kazamaru must journey to Ohkami Castle to rescue the princess, who has been kidnapped by the tyrant Gyokuro. 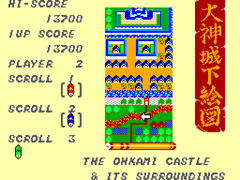 The game is an overhead run-and-gun. The player controls the ninja Kazamaru, who is moved in any direction with the D-pad. Kazamaru throws shurikens at enemies in the direction that he is facing with

. He throws shurikens forwards, regardless of which direction he is facing, with

, which allows him to strafe targets. Shurikens can collide with enemy projectiles and neutralize each other. Kazamaru can disappear for a brief duration with

, during which he is impervious to damage but also unable to attack. He can continue to move while disappeared, which makes the ability useful for repositioning or evading enemy fire.

The goal is to progress to the top of each stage, fighting or eluding enemies along the way. Enemies appear when Kazamaru reaches certain points of the stage but do not respawn once defeated (except on the last stage). A boss encounter awaits at the end of the stage. A few stages diverge from this and autoscroll sideways. With the exception of these autoscrolling stages, the player is free to backtrack with Kazamaru.

Kazamaru can find colored scrolls in the stages. Red Scrolls upgrade his weapon, and Blue Scrolls increase his movement speed. These effects persist to the next stage. There are also five Green Scrolls hidden throughout the game that must be collected to access the final stage. Once all five have been collected, the player is given a hint for a secret shortcut in the Castle Courtyard stage that skips to the last stage. This shortcut only works if the player has all of the Green Scrolls collected. If the player completes the penultimate stage without all of the Green Scrolls, the player is sent back to a stage with a missing scroll and must find the remaining scrolls and play back to the end of the game.

Kazamaru loses a life if he is hit by an enemy weapon. He loses his Red and Blue Scroll bonuses if he loses a life. The game ends if the player runs out of lives. The player is awarded an extra life at 30,000, 100,000, and 200,000 points. The player is given bonus points for accuracy (number of targets hit per shots fired) at the end of each stage. The piercing shots given by the Red Scrolls can greatly improve accuracy and can even be used to get an accuracy score of greater than 100%.

Red and Blue Scrolls are occasionally dropped by defeated foes if their effects are not already active.

Though similar in design and overall gameplay, the Sega Master System version of Ninja Princess features a different soundtrack, re-arranged stage layouts, and most notably, a male protagonist.