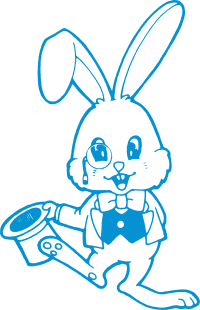 Professor Asobin bares more than a passing resemblance to the "White Rabbit" character in Lewis Carroll's classic children's story "Alice's Adventures in Wonderland", with a particular similarity to the popular characterisation depicted in Disney's 1951 animated version of the book "Alice in Wonderland". No information is known as to the origins of Asobin or why, or if, Sega chose to mimic these characteristics.

Although he never starred in a game of his own, Asobin gained attention by appearing in nearly every Japanese SG-1000 game manual following the console's retail launch on July 15, 1983. He was replaced briefly by a very similar, but less leporine Dr. Games in 1984, but reappeared for the new range of MyCard software in 1985 and also appeared in a number of early Sega Mark III games as well. Usually printed towards the end of the manual, Asobin offered advice to players that was usually helpful and specifically tailored for each game.

His last appearance giving advice was seen in the manual for Makai Retsuden (aka Kung Fu Kid) released on 17th May 1987, however he continued to appear in manuals on the page describing the correct care and maintenance of cartridges and cards during the rest of the Mark III releases. 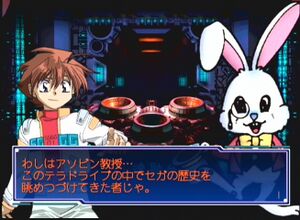 With the release of the Sega Mega Drive in late 1988 and Sonic the Hedgehog in June 1991, Professor Asobin was retired by Sega, and has only appeared sporadically since. In 1994 the character appeared in the manual for Phantasy Star Fukkokuban promoting support hotlines. He has cameoed in the likes of Segagaga and Hi-sCoool! SeHa Girls, and often appears in Sega-related throwbacks, such digital manuals for Sega Networks games.

Professor Asobin is rarely printed in any non-Japanese manuals or promotional material, though is occasionaly spotted, such as on the box of Sega 3D Classics Collection for the Nintendo 3DS.