Joe & Mac, known as Joe & Mac: Caveman Ninja in Europe and Joe & Mac: Caveman Fight (ジョーとマック 戦え原始人) in Japan, is a 1991 platforming action game for the Sega Mega Drive. It is a port of the Data East arcade game of the same name. It was developed by Eden Entertainment Software (under contract to Elite Systems).

Publishing licenses of this version were granted to Takara in North America, Tec Toy in Brazil, and Codemasters in Europe. While the game was released in North America and Brazil in early 1994, the European version never materialized.

Joe and Mac must rescue a group of cavewomen who were kidnapped by a rival tribe.

The game is a side-scrolling platformer with a prehistoric setting. The player can control Joe, a green-haired caveman, by starting a game through controller port 1 or Mac, a blue-haired caveman, by starting a game through controller port 2. Both characters play identically. A second player can join the game on the title screen or during gameplay by pressing  START  on a second control pad. Levels are short and fast-paced and end with a boss battle. Some levels let the players choose the next level after defeating the boss, though either choice leads to the same subsequent level.

Joe and Mac walk with

and jump off platforms with

. They can perform a high jump where they curl into a ball with

. Enemies can be defeated by jumping on top of them. In two-player games, one character can jump onto another and then pick him up by pressing

and throw him by pressing

Joe and Mac throw a projectile weapon with

. They shoot directly upwards with

and can also shoot while squatting or jumping. They start with throwing axes, which are thrown out at short range but quickly fall to the ground. They acquire different weapons by finding them in eggs. The weapon can be charged to a larger, longer ranged, and more powerful attack by holding

, though charging it for too long exhausts the character and costs health.

Joe and Mac have a health meter that goes down as they take damage from enemies. Falling down bottomless pits only costs health and bounces the characters back out. Enemies usually drop food items when they are defeated, which heal Joe or Mac when collected. Characters lose a life when they run out of health. In single-player games, the player restarts from the beginning of the level or the boss fight after losing a life; in two-player games, players have separate lives and Joe or Mac revives by falling from the sky without interrupting gameplay. Characters revert to the throwing axe weapon after losing a life. The game ends for a player when the player runs out of lives but can be continued.

Some levels let the player choose the next level after defeating the boss.

On the Mega Drive, Joe & Mac is a no-frills arcade conversion, and while some of the graphics have been simplified, the game remains broadly the same. Its Super NES counterpart, on the other hand, is an expansion over the arcade game, featuring longer levels and more content, and a map screen similar to that of Super Mario World. The core gameplay remains identical between all versions, however.

In the arcades, Joe & Mac operates with an internal screen resolution of 256x240, which is then expanded horizontally to fill a 4:3 display. As the resulting pixels would not be square, the art assets are drawn "thin", with normal dimensions being resolved when displayed on-screen.

This is convenient for the Super NES version of Joe & Mac as its internal resolution is 256x224 (meaning the horizontal expansion is roughly the same), however this Mega Drive version operates with a native resolution of 320x224, causing almost every graphic in the game to appear too thin as the assets were not re-drawn. A side effect to this approach is that more of the play area is visible at any one time than in either the arcade or Super NES versions. 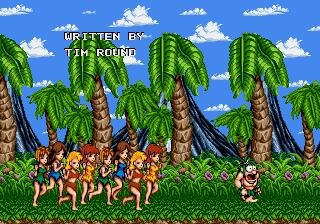