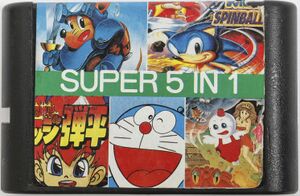 A common practice amongst video game bootleggers is to combine two or more games into one - in the Sega Mega Drive's case, resulting in unlicensed multi-carts. Such an idea is particularly prominent in Asia and South America - often moreso than the act of releasing bootlegs of individual games.

The process is achieved by using high capacity ROM cartridges - with early games such as Tetris shipping on 256kB ROMs, multiple copies can be placed within a 2MB or 4MB ROM with room to spare. Sometimes a simple menu would be programmed to select between the titles, or a soft reset of the console is required to switch games.

Unlike the Nintendo Famicom, in which multi-cart sizes ballooned during the 1990s and 2000s (to the point where manufacturers would (often erroneously) claim a multi-cart contained hundreds of games), it is more common to see Mega Drive multi-carts contain between two and eight games - typically when a cartridge claims to have more than ten, it is a strong indication that games will be repeated, sometimes with very minor changes. Newer Mega Drive games are rarely seen in multi-carts, not only because of their size, but due to tighter security from developers.

Sega have released multiple officially licensed compilations, which save for an expected layer of polish, offer much the same thing.

Thousands of Mega Drive mulit-carts exist, with new ones continuing to be created today. While Sega Retro is attempting to document as many of these cartridges as possible, the volume of releases and the desire for their creators to hide their identities makes this an extremely difficult, if not impossible task.

Our documentation of unlicensed multi-carts is at a very preliminary stage, and as such we are only able to reliably group multi-carts based on appearance (with the view that a similar aesthetic likely means they are related in some way). Most multi-carts lack any sort of obvious pattern, making it dificult to cleanly represent them on this wiki. For an unorganised collection of other known multi-carts, see the multi-cart project page.

Some multi-carts have been documented in more depth, usually because the ROM has been dumped or the cartridge is unique among its peers:

In more recent years, bootleggers have chosen to label their produce more intelligently, and so newer multi-carts are generally easier to group together:

Due to the sheer volume of releases, special consideration has been made for some countries:

Special consideration has also been made for more "modern" multi-carts:

While most multi-carts do not follow an obvious pattern, some do, allowing for us to group releases together:

Backwards compatibility with the Sega Master System allows for collections of Master System games to be included on a Mega Drive cartridge. These products are rare amongst multi-carts, as the Master System never achieved the same worldwide foothold as the Mega Drive, and newer Mega Drive systems cannot run these games.