The game's Cloud Server technology was licensed from Ubitus who had in the past also licensed their technology to Capcom for Resident Evil 7: Cloud Version. Although in the past all versions of Phantasy Star Online 2 were able to play together at the same time, Phantasy Star Online 2 Cloud is only able to play with PC players cross-platform. It is widely believed that this was done at the request of Sony who has had a history of limiting cross-platform capabilities in other games with similar support.

Phantasy Star Online 2 Cloud was first announced via a Japanese Nintendo Direct presentation on September 14th, 2017. The game would be released on April 4th, 2018 as a free Japanese eShop digital exclusive. The game is one of the few Nintendo Switch titles which doesn't require a subscription payment to the Nintendo Switch Online service. Players using a SEGA ID to play were able to use their data on other devices as well, however, an update on October 10th, 2018, would enable Nintendo Switch players who start playing immediately without a SEGA ID via the "Easy Login" feature.

As the Nintendo Switch is region free, players from outside of Japan are able to download the game using a Japanese eShop account. Furthermore, unlike other versions of the game, there doesn't exist any form of region blocking for the South East Asia region. Regardless, the game can be difficult to play from outside of Japan as a result of latency and the game automatically disconnecting players after a set amount of time if their wireless connection is not fast enough.

The cloud servers run a modified PC version of the game which has access to the same game servers used in all versions of the game. As a result, the game is not too different from how it handles on PC but some differences still exist. 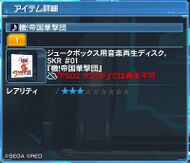