Sega Arena Nakama (セガアリーナ中間) is a Sega Arena venue opened by Sega in November 1998.[1] One of the flagship locations of the naming scheme, it originally contained several attractions, and continues to house elaborate theming of Sega's properties and consoles. 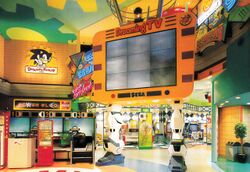 The facility is themed around the concept of "Sega Dreaming Factory", which sends Sega's fun, joy, and dreams to the world.[1] The entrance to the building is designed to resemble a television screen, while the interiors are adorned with brightly-colored gears, logos of Sega game franchises and consoles, a timeline of arcade releases, and colorful comic-book styled murals featuring Sonic the Hedgehog.

Alongside its main draws of coin-operated arcade machines and a number of interactive attractions, the centerpiece of the venue is the 120-inch "Dreaming TV", a large projection screen mounted on a pair of immobile legs which resemble those of MBV-04-G Temjin from Cyber Troopers Virtual-On. The "Dreaming TV" was originally used as a demo station for the Dreamcast,[2] but currently displays a static promotional image.

An inflatable figure of Sonic the Hedgehog connected to several unmarked buttons. Some buttons blow air into the figure, while others release air. The object of the game is to completely inflate Sonic.

A futuristic jukebox which allows patrons to select a variety of Sega game music and enjoy a light show synced to the melody.

A backdrop for taking photos, themed to look like the cover of "Sega Magazine."

A mini-museum celebrating the history of Sega's home consoles from the Mega Drive to the Dreamcast, with playable demo units of each.