How will this average feature work: will it need to be updated manually when a new score is added? I know MediaWiki has a basic system that we can use to automate everything, but how will this extend to multiconsole and Template:Num?
Hell, we should probably automate the magazines that don't use a single number...- Andlabs 16:33, 14 August 2011 (CDT)

I just calculated things by hand - I think there was an attempt at automating things when we first made this template but it didn't work out. Besides, if you're working with multiple consoles it'll probably get a bit confused. It's tedious, but hunting out old magazines in the first place probably takes longer.
More of an experiment to see if it would look nice really. Tons of pages use this template and it would take a while to go through them all and add avereages -Black Squirrel 05:03, 15 August 2011 (CDT)

the idea here is that it would be one per system and you'd be able to show/hide each list, thus reducing clutter. Probably needs tweaking. Probably not easy to convert into a proper, working template either. But yeah -Black Squirrel 16:20, 9 December 2011 (CST)

If we do go with that one, there might be a way to automate taking the averages but it might involve an extension and might not work with the average at the top; I'd have to look into it - Andlabs 16:35, 9 December 2011 (CST)

5
If you see 7 2 5, then we have both ParserFunctions and Variables extensions, which should be all we need (as far as I can tell)
Maybe we can also make it slightly fancier by providing things like an automatic GamePro score calculator that one can show the original score as a popup, but IDK if/how that would work - Andlabs 16:50, 15 December 2011 (CST)

OK now that it works

I went ahead and added a collapsible element on the template (I had wanted it to show "out of x reviews" but it looked kind of assy that way.) My question is: how do we want to handle rescored games? That is, a game gets reviewed in one issue of a magazine and then gets a second review (usually for a buyer's guide or something.) My gut is to go with the first recorded review, as that stays truer to the time and truer to the goal of getting all reviews of that time. - Scarred Sun 23:54, 17 March 2012 (CDT)

I already made a "cvg_1" for second Computer & Video Games reviews. I wouldn't like to not have second review scores recorded, but I'd be fine with not counting them towards the average. - Hivebrain 00:20, 18 March 2012 (CDT)

Perhaps something after the template, to indicate that a rescore happened?

They don't usually give reasons for rereviews. Just stick them at the bottom of the list like this:

I'd average the two scores. So if CVG gave the game 78 one month and 80 the next, we'd list it as 79 and provide two sources.
The problem is, you can't always treat the first review as the most accurate. Some magazines review the import version of a game before the localised one. -Black Squirrel 05:20, 18 March 2012 (CDT)

How do you add ratings for magazines not listed, such as Zero?

I understand now, thank you.

"The text you wanted to save was blocked by the spam filter. This is probably caused by a link to a blacklisted external site.

The following text is what triggered our spam filter: display:non*"

Now I can't revert to the previous edit either as it also contains "display:non*". Could someone fix this please as the template is now displayed wrong on all game pages. (*=e, I can't post it here either as the Spam protection filter continues to block it)

Thanks for reverting my edit, but Spam filter still prevents me from editing this page, I'd like to add Games-X magazine so that I can start adding the reviews from this magazine.

Aaargghh ... now I can't post a link without spam filter asking me to tell cats from dogs, but there's no submit button to enter the answer and the pictures are also obscured by the black Sega Retro bar at the top of the page. This is frustrating --Pirate Dragon 15:10, 6 August 2012 (CDT)

So guys, how feasible do you think it is to create a Metacritic-style "high scores" table, i.e. aggregate all these ratings templates so we can compare Mega Drive games against each other or whatever

I've tried to do this in the past, but it's a really awkward mess. If you use DPL you can grab all the ratings templates from pages in a category, but it won't differentiate between consoles and you can't pick apart values (it will always render the table in full, console icons and individual review scores in-tact - you can't just have it print the average score). Also Cloudflare hates you if you use DPL too often

Supposedly there is syntax available that will let you generate lists depending on template parameters, but it's pretty horrible and woefully under-documented. Any ideas? -Black Squirrel 14:33, 23 February 2013 (CST)

Not sure this is populating Category:Rating without PDF source - it's likely a quick fix but I'm not sure if we want a more elegant solution? Do we want to build this functionality into the Num template, in case we need a PDF source somewhere else?

p.s. do any testing on Template:RatingsTest - because there's so many pages relying on this template, updates kinda cripple the server in the short term, as mediawiki goes through every page using this template and updates it. It takes hours to move pages en masse to and from categories - that's why I didn't notice the above wasn't happening - the category seemed full and it would take an age to referesh.

It's also not flagging up non-magazine publications even though I'm using Template:OnlineRatingTest. I don't know why (yet) - Mediawiki syntax is really hard to read. -Black Squirrel (talk) 11:52, 25 June 2016 (CDT)

I'm not sure it works like that.
I think, when you update a template, Mediawiki cycles through any pages that link to that template. There's thousands of (big) pages that use the Ratings template so that takes a while (though why it's given such a high priority as to lag the user experience is another matter).
The MagazineName template is only used by a small handful of pages (which are themselves templates), so that doesn't take very long to cycle through. Something like MagazineNameUK is technically only linked to once, so the update is instantaneous.
I've just added something to MagazineNameJP which will be getting called indirectly from thousands of ratings templates and 700+ magtables, and it hasn't caused an issue... unless there's a delay -Black Squirrel (talk) 13:19, 25 June 2016 (CDT)

Had a couple of ideas:

I'm thinking we no longer need to use Template:num anymore for references. Magref will do - it helps circumvent some of the problems with magazines that don't have numbers. (i.e. we wouldn't be doing "№1998-01" anymore), and it's less for editors to think about. There is a slight issue perhaps with real page numbers not lining up with how the magazine counts page numbers... but I almost feel is if that "offset" should be baked into the cargo table somehow. If we even care.

Secondly there are more magazines than I originally thought that don't give an overall review score. EGM is a known example where four people give judgement (which we currently average), but loads of Japanese magazines (like Famitsu) do it as well. While I still think the Sega Retro average score is a useful thing to have, I think we can afford to show our workings 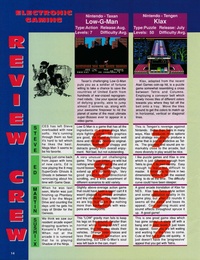 Likewise if a magazine uses a star system, show the actual stars:

Wikipedia does this, but they don't calculate an average.

if the magazine gives ones of those awards like "crash smash" or "C+VG hit", we could support that too. Bit excessive, but it represents what the magazine actually gave the game.

This system would mean editors don't have to try and work out what the numerical meaning of "B-" is, because we could build it into the template. I've avoided putting in EGM and GamePro scores for this reason - I can't be bothered to do the maths -Black Squirrel (talk) 13:49, 5 December 2018 (CST)

This was my plan (sans the extra column) ->
this method isn't going to work though, because the new Star/LetterRating templates have been evaluated prior to this ratings template being called. So in this example you get 75 (B) for the first magazine, and then nothing.

This will need more thought. On the plus side, a bit of tweaking and users won't have to do any maths when adding a score. -Black Squirrel (talk) 13:27, 6 December 2018 (CST)

Instead of "joypad={{StarRating|4|6}}", you could have "joypad=4/6", then the ratings template detects the "/" and uses StarRating accordingly. That should let you get the rating value as it's needed, and it'll make it easier for people to add ratings.
One thing that slightly bothers me about star ratings is the way they're scaled, so you only ever have a rating between 20 and 100%. It might make more sense to have one star equals 0%, two equals 25% and so on. This is just a minor quibble that can be dealt with later. - Hivebrain (talk) 14:16, 6 December 2018 (CST)

I suspect some means of explicitly telling the template what rating system is in use will be required - there's at least one German magazine that I've come across that uses the country's academic system (which handily I can't find right now, but it's definitely there), and UK magazines like ACE which rate out of 1000.
One thing about the star system which I've not implemented are half stars. I uploaded the graphic to Retro CDN, but I can't think of any magazines off the top of my head which use half stars, so I didn't bother implementing it (I'm almost positive there's at least one though). It means 1/5 can't be 0%, because you might get 0.5/5.

I did think once of using some fancier maths, i.e. adjust the scale relative to the lowest (and highest?) score a magazine ever gave a game. So if a magazine never gave a score below 20%, 20% would be treated as "0". While it would theoretically remove a bias, it falls apart a bit if the magazine didn't review many games. -Black Squirrel (talk) 14:49, 6 December 2018 (CST)

IIRC Metacritic keeps records of how much a publication deviates from average scores. It's not very scientific but it lets you know if a publication is unusually positive or negative compared to others. We could do that... somehow -Black Squirrel (talk) 14:53, 6 December 2018 (CST)

I was going to make vectors, but that took too long:

GamePro ratings. Don't know what I'm going to do with them, but they're here.

When expanding the "Sega Retro Average" box, most of the reviews no longer display. Is there a new way that reviews should be added, or is this a known issue that will eventually be fixed? If the latter, is it worth adding reviews now, or waiting until the issue is fixed incase reviews will need to be added in a different way? Pirate Dragon (talk) 15:16, 28 January 2020 (EST)

Still add reviews - it's important that the information is saved, even if we can't see it
Although you might just need to go Actions -> Purge Cache (I really want the wiki to do this automatically... but I want lots of things) -Black Squirrel (talk) 15:28, 28 January 2020 (EST)

Purging the cache doesn't fix it, but I'll add them for now anyway. Before I add thousands of ratings, what's the preferred format for the source? "magref|example|99|99|printpage=99"? What's the difference between page=99 and printpage=99? Sorry for all the questions, it's been a while since I've added these and a lot has changed in the meantime. Pirate Dragon (talk) 16:55, 29 January 2020 (EST)