Unreal Tournament is a first person multiplayer shooter developed by Epic Games as a spin-off of the Unreal series. Originally released for Windows PCs, it was ported to the Sega Dreamcast in 2000 by Secret Level.

Unreal Tournament is a multiplayer FPS, and thus games always feature two or more players navigating a map from a first person perspective. Similar to other Unreal games there are weapon and item pickups, however gameplay is centred around competing against other players, rather than in prior games where the goal was to get to a specific point on the map.

These can be played either in single player (where the player competes against computer-controlled "bots") or local multiplayer. In North America online multiplayer was also an option until the servers were shut down in 2003 - this feature was removed from PAL versions[5]. 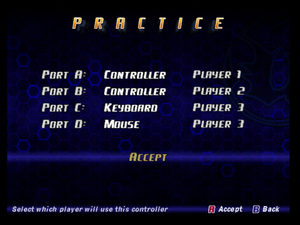 Controllers and accessories can be mapped to specific players.

Unreal Tournament for the Dreamcast is compatible with a number control options which can be configured by the user. Along with the standard controller, the MadCatz Panther DC as well as the Dreamcast Keyboard and Dreamcast Mouse are compatible with the game. As the mouse and keyboard configuration requires two controller ports, it is possible to map individual players to two devices in split-screen multiplayer. During three or four player matches, each player can only use one controller, keyboard or Panther DC. The game does not consider the mouse alone as a control choice.

During online matches, the Dreamcast keyboard can also be used for text chatting between players, or between team members during team games.

The Dreamcast version only features male avatars as playable characters and bots. Up to eight players/bots can play at once. All instances of other genders and races have been removed, and the Dreamcast has taken the class types down to Soldier only.

In Unreal Tournament, "mutators" are used to significantly adjust the game rules. 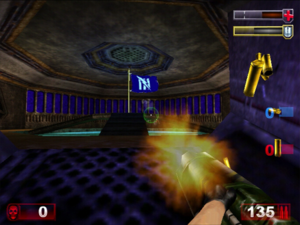 Some guns have alternate firing modes that cause more damage but are less accurate.

Most weapons in the game feature two different firing modes. Some firing modes may be disabled through the use of Mutators. 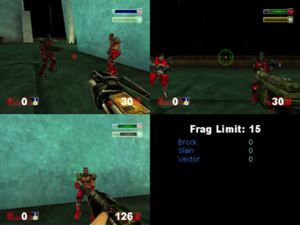 Unreal Tournament allows up to four players on more maps than the Dreamcast version of Quake III Arena.

A number of levels have been converted, edited or created exclusively for the Dreamcast version (As well as the Playstation 2 version,) to accommodate for the maximum player count of eight. Certain levels can only be played splitscreen depending on their size and system resources. SegaNet subscribers were given access to two exclusive maps if they subscribed to Sega's now defunct online service. Below is a list of levels and the maximum number of players allowed for each both online and offline splitscreen. 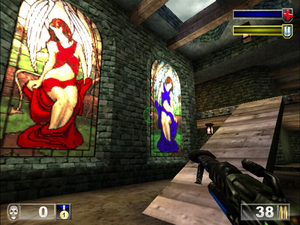 Some of the content was redrawn due to difference in standards between platforms.

The Dreamcast version of Unreal Tournament is based on the PlayStation 2 version of the game, which was created in-house at Epic Games. The publisher, Infogrames, commissioned developer Secret Level to convert the title to Dreamcast.

The Dreamcast's 8 MB VRAM was sufficient for all of the game's polygons and textures, with the framebuffer and polygons using 3.5 MB, while the PowerVR CLX2's hardware texture compression was used to compress the textures into the remaining 5.5 MB of VRAM.[9] However, the Dreamcast version is missing some features, including instances of dynamic lighting, reflective surfaces, simpler water textures, and in some levels, a skybox. Several levels were downscaled in terms of geometry, effects, and size. Due to RAM limitations, certain levels become unavailable for split-screen multiplayer. Several features from the PC version are also missing, such as the "Assault" game type due to map sizes being too large, and the female, robot and Nali War Cow avatars are not selectable player types.

Texture filtering differs considerably between the Dreamcast and PlayStation 2 platforms (with the Dreamcast having more texture filtering), and the Dreamcast version runs with an uncapped 60 FPS frame rate (as opposed to a locked 30 FPS on PS2). The Dreamcast maintained a stable frame rate of around 40 FPS on most maps, while peaking at 60 FPS, but occasionally struggles with larger maps, sometimes dropping as low as 15 FPS when under strain. The Dreamcast version's frame rates are comparable to how the PC version ran on early 2000 PC hardware, which maintained an average frame rate of around 40 FPS with graphics cards like the Nvidia GeForce 256, GeForce 2 GTS and ATI Rage Fury Maxx.[10]

The game has also been lightly censored in order to comply with standards and practices established by Sega at the time. Certain textures featuring nudity have been redrawn, however the PlayStation 2 version lacks any form of online play, and still lacks the amount of content seen in the PC version.

SegaNet members were granted access to two exclusive levels, Megaplex and Outskirts, via a paying membership. Due to the discontinuation of the Dreamcast's network capabilities and SegaNet, the feature can no longer be obtained through normal means. To unlock them without a SegaNet acount, with the Dreamcast Modem plugged in, navigate to the Network screen, select Account2, and enter the following variables:


Leave the other variables to their defaults, then select "Connect" and save settings. The two levels should then be unlocked.

Unreal Tournament can utilize VMU storage to save progress. It can carry eight save games for the Single Player mode and levels that are unlocked for play in Practice Mode.