Crystal Warriors, known as Arliel: Crystal Densetsu (アーリエル クリスタル伝説) in Japan, is a strategy game developed and published by Sega for the Sega Game Gear. It received a sequel in Japan, Royal Stone: Hirakareshi Toki no Tobira.

Four elemental crystals maintain the balance of peace in the Kingdom of Arliel. The underworld Jyn empire have overrun the kingdom and stolen three of the four magic crystals. Princess Iris of Arliel, a sorceress, remains in possession of the last crystal, the Earth Crystal. She takes it with her on her quest through the lands of Arliel to defeat the Jyn.

Crystal Warriors is a strategy game with RPG elements, similar to the Shining Force games.

The player forms a party of up to nine units to fight in each round. The player starts on one side of the map and an enemy force of up to nine units occupies a castle on the opposite side. The player must defeat the enemy force by defeating all of its units, defeating its leader, or capturing the enemy castle (by moving a unit onto its entrance). Each unit has a class that determines its statistics and capabilities. Each round has terrain features which form bottlenecks or change the speed of units. The player and enemy army alternate turn phases where they can move their units in any order and order them to attack or cast spells. The turn ends when the player has ordered every unit. The identity of enemy units is initially unknown at the beginning of the round. They reveal themselves and their statistics, abilities, and elemental alignment when they attack or are attacked, or the player can use the Scan spell to reveal any individual enemy.

Whenever a player unit attacks an enemy unit or vice versa, a battle occurs. A battle consists of two bouts in which the units fight with melee weapons, spells, or monsters. The aggressor strikes first in each bout, then the defender takes a turn. Because of this, units risk taking damage each time they attack another unit (with the exception of mages casting offensive spells, which can only be retaliated against if the defending unit is another mage or adjacent to the mage). To avoid taking damage, units can try to retreat instead of attacking. Defeating an enemy earns 4 experience points for the victorious unit and drops gold for the party. Units only gain experience when the enemy unit is defeated. Units gain a new level for every 10 experience points, acquiring higher stats, up to a maximum level of 9. Units are defeated when they lose all of their hit points; death is permanent, and fallen characters cannot be revived. The game ends if Princess Iris is defeated.

Units can also defeat and tame monsters (which are also assigned an element) in each round and use them in battle. Monsters, though very weak, are useful to avoid elemental weakness (a Fire Lord, for example, can tame a Wind monster, and use it in combat against a Water Fighter, thus flipping the elemental advantage). They can also be used to spare their owner from taking damage. Like party members, monsters are permanently lost if they are defeated, but more can be captured in each battle.

After each round, Princess Iris enters a town. The town contains an inn where the player can save the game or recruit new units, a fortune teller that provides hints about the next round, vendors that sell new weapons, armor, and spells, and NPCs that talk to the player. The player does not have enough gold to hire all the available units or purchase all available items in a single playthrough.

The game includes a two-player mode available by connecting to another Game Gear via a Gear-to-Gear Cable. One player starts with Princess Iris and selects eight other team members from the recruitable characters found during the single player game. The other player starts with Princess Cham, an evil counterpart to Iris, and can select eight other team members from the standard Jyn forces. Any map can be selected as an arena; teams start on a fortress and the opponent's team members are revealed in the same way as the single-player version. To win, the player has to defeat the entire opposing force or take the enemy fortress. 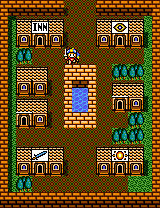