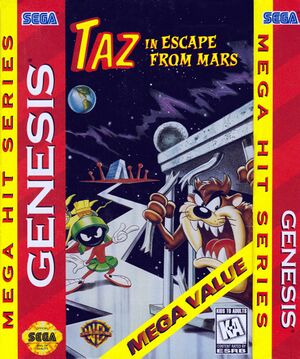 Taz in Escape from Mars with the Mega Hit Series label.

The Mega Hit Series was a budget label for re-released Sega Mega Drive games in North America. It was announced at E3 1997 and applied to ten "popular" games, all of which were re-released in September 1997 for $19.99 USD[1].

Games under this label were distributed in cardboard boxes to keep manufacturing costs down. Three games in the series, Sonic the Hedgehog 3, Taz in Escape from Mars and Vectorman were known to be released twice under this label. Some versions have the Sega Seal of Quality in the bottom left hand corner, while presumably later releases do not. No other games in the series carry the seal.

North America also had the Sega Classic label for older games which were re-released, and the Mega Hit Series is thought to have replaced this. The specific requirements for what constituted a "popular" game is not known, and curiously Super Monaco GP was released under both labels.