In addition to the five passwords revealed in game, a number of others also affect the game. Some only work with the Japanese version, however:

Mary Had a Little Lamb

If the player waits for one minute after throwing the final metronome to the final Umotomat in the first area of Planet Sonata before encountering the mini-boss, a rendition of "Mary Had a Little Lamb" will play. 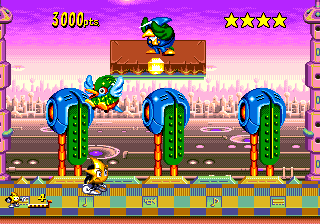 If the mini-boss of Planet Sonata is defeated before the first wave of Chibis appear, an Umotomat will fly in from the right and drop a Yellow Jewel worth 10,000 points. As the bobbing heads move quickly in randomised patterns, this is incredibly difficult to do, though a player with quick-enough reflexes can land three hits on one of the heads during the mini-boss intro.

to move faster. To exit free movement, disable the code and press  START .[1] 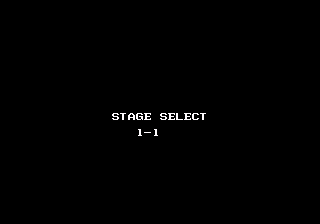 An early text-based stage select can be accessed using the following Game Genie codes depending on game version and pressing  START :

To navigate this screen, press

to select a level. Note that in the International versions, there is no text displayed as the font used for this screen has been removed, but the stage select is still functional.[1]

Pro Action Replay code FFFE05:08 will enable a slow motion mode, cutting game speed by half. Be warned, as the game will freeze after completing a stage when using this mode.[1]