TUME[1][2] (The Universal Map Editor) is an open source tile based map editor (released on June 18, 2000 under Mozilla Public License 1.1.) originally created and designed, by Greg Marquez[3][4] (Richard Greg Marquez), John Alvarado[5] and Gregg Tavares of Echidna in 1989, for the Amiga computer (used for the first time in the development[6][7] of LIVE Studios, Inc., Future Classics Collection[8] 1990 video game) and later ported[1] to MS-DOS by Dan Chang[9] at Virgin Games request (commissioned[1] by Dr. Stephen H. Clarke-Willson[10] an American video game producer and executive producer in the early 1990s and Vice-President of Virgin Interactive from 1991 to 1994). From 1991 to 1996 it was licensed to many video game development companies and used to create levels, maps, stages and tables for many 8-bit and 16-bit games. It is currently available as freeware and it's fully usable with DOSBox emulator. 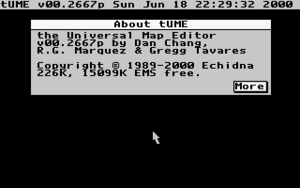 TUME distinguishes itself from other map editors of the era in several ways. One, it copies the keyboard layout of Deluxe Paint, the most popular image editing software at the time.

It supports editing multiple maps at once (or "Rooms" as called in TUME software). It also allows an arbitrary number of layers per map allowing tiles to be stacked.

Another unique feature is that it features no graphic editing tools, relying on external applications like Deluxe Paint.

TUME saves a generic IFF format file (the IFF standard was defined by Electronic Arts and Commodore) and then relies on customized converters called "TUMEPacks". These tools take the various graphics, maps, layers and based on various settings create all kinds of data including not only the graphics but things like height maps for collisions, logic mappings to map an image to a certain meaning internal to a game's logic, replacements for when areas of a map needed to be replaced at runtime during a game and many other types of data.

TUME was used as the map editor for a number of games including: