Bomberman Online (not to be confused with Online Bomberman) is an entry in the Bomberman series of games by Hudson Soft. This one was released for the Sega Dreamcast exclusively in North America, and is notable for being one of the few versions of Bomberman to be playable on the internet. Up to four players can play locally and up to eight players can play online.

A previous entry of the Bomberman series on Sega consoles, Saturn Bomberman used "direct dial", which could link multiple consoles together via the internet without the need for external servers. Bomberman Online, however, lacks this feature, and therefore can no longer be played online as its servers were shut down in 2003.

On a small island on the Planet Bomber named Quintet Island is an event held once every four years called the "Bomb-A-Lympics" (similar to the real-life Olympic movement). Competitors are tasked to collect Gold Medals from all five Bomber Events that will grant them the title of "Master Bomberman."

The following are the default controls during gameplay. Controls can be changed in the options menu.

Unlike some of the previous entries that attempted to bring Bomberman gameplay into the third dimension such as Bomberman 64, Bomberman Online retains the traditional grid-based gameplay centered around blowing up other opponents with bombs. Laying down a bomb will cause it to explode after a small period of time. Each player is given three stats: Bombs, Fire and Speed. Bombs determines how many bombs can be placed on the playfield. Fire determines the player's bomb's blast radius depending on where it is placed. Speed determines how fast a player can move. Gameplay becomes more intense the faster players move and how they place bombs. A blast radius connecting to other bombs will cause a chain reaction providing greater advantages of the playfield.

Each game mode offers a variation of the standard Bomberman gameplay along with gimmicks and other powerups. Get ready for the Bomb-A-Lympics!

White Bomberman takes the challenge on his own to compete against five Champion Teams to reach the top spot by himself in the Bomb-A-Lympics. All opponents are computer controlled with each game mode broken up into three areas where teams in Two-Point Matches. Following those are Bosses in One-Point Matches. Defeating the boss earns a Gold Medal and a step towards the end goal of "Master Bomberman."

Each arena is dominated by one of five teams, which represents each rule type.

In addition to the main gameplay grants a random chance to obtain a "Collection Panel" which provides a costume piece that can be shown off in the online mode. 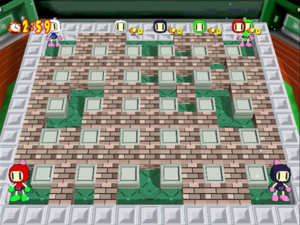 Four Bombermen compete in the beginning of a Survival match.

Up to four players, either human or computer controlled, compete to gain the most points. Players can also be set for up to two teams to cooperate with one another. Additional rules are also set before the beginning of a match.

Once the rules are set, a stage is then selected. A list of stages can be found here. 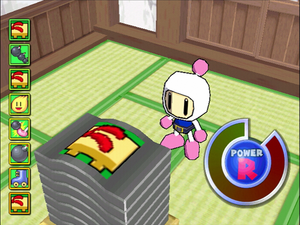 Bomber Karate awards the lead player with an item that may help or hinder them the next match.

After a match has finished, the lead player will play a round of Bomber Karate. First by holding the

trigger then pressing the

button will cause the player to chop the blocks in front of their character. Depending on how deep the

trigger is held, the more blocks of wood will be chopped through. The item received will carry over through every round of the next match.

If the Mini Game setting is set to off, the mini game will be skipped. The Mini Game cannot be played if players are in teams. 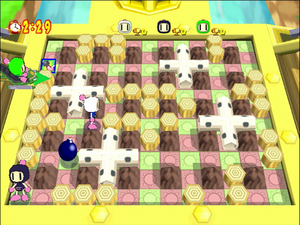 Miso Bomb allow players to jump back into the game.

When a player is defeated, and if the feature is turned on, players will appear on the sidelines in a small craft that allows them to throw bombs at the other players. Miso Bomb players will only be able to throw one bomb at a time and their fire rate will be at +2. If the feature is turned on to "Super" then they will be able to replace players if their fire range catches the target player(s).

During rounds, a skull icon may appear depending on the rules set above. If skulls are turned on and collected, they will affect the player in one of several ways. They can also spread the skull power by touching other players. These are the following effects of the skull power-up. A backdrop used in the Network game setup.

Up to four players per console can join games for up to eight players over the internet. Not all of the game rules are available to play online however. Each local player can load their avatar created from the Extras menu so long as their VMU is present in slot 1 of their respective controllers. To play online would require a paid SegaNet account. This mode also grants extra chances of obtaining certain costume pieces not found elsewhere.

Before each match is a central Arena room where players can join together in a chat room and begin or join rooms.

Starting a room will grant access to the Room Master options. Once there, the rules can be set up for the match. Extras Box allows for avatar customization to be used for online games.

Extras Box allows players to customize their Bomberman avatar for use in the Network mode with costume pieces obtained via Collection Panels from the Normal Game mode as well as rare opportunities in Network mode by destroying softblocks. Because the Network mode is no longer available, you cannot use your avatar and not all collection panels can be obtained normally. There are 96 panels to collect altogether. After selecting a menu option pulling the

Triggers will scroll between different options.

Using the D-Pad left and right selects a body part to edit and up and down to select a parts that are available. Holding

will rotate the avatar and pressing

will cycle between different animations. Once done, pressing

will return to the main Extras Box menu.

Bomberman Online can utilize VMU storage to save Normal Game progress and accumulated Collection Panels. In addition online play allows one group of players (players per system) to use their avatar and nickname set from the Extras mode in the Network mode when plugged into slot 1 of their respective controllers.