Saturn Bomberman (サターンボンバーマン) is a Sega Saturn puzzle action game developed and published by Hudson Soft. An entry in the popular Bomberman series of multiplayer-focused puzzle titles, the game was first released in Japan in July 1996.

Two months later, it was followed up with an XBAND-compatible version for online gameplay, released exclusively in Japan; this version was later localized and brought to the United States in August 1997, with the game being reprogrammed to utilize the Sega NetLink modem accessory. Versions published in Europe and Australia, as well as the Japanese Satakore budget release, do not feature online functionality.

The game is played on a grid where the player drops bombs and must defeat opposing foes and clear obstructions. Power-ups are distributed to enhances the character or increase the reach of dropped bombs or it's behavior.

These are the default controls. Controls can be changed to five different presets in the Options menu.

The game features a number of items that are split across all three game modes. While most will provide players benefits, some items may also hinder them. A letter next to each one notes where the item can be found.

During a Battle Game, players can pick up a Skull icon that will affect them with a specific sickness. Collecting a Devil icon causes everyone to be affected by a random illness. The player who collected the Devil icon will be highlighted until the illness ends for all players.

During a Normal Game or a Battle Game, an egg can be discovered by blasting a softblock apart. Collecting one will hatch out a Dinosaur. Not only will they provide the ability to take damage for the player, they also provide special abilities by pressing

on the control pad.

Dinosaurs also have the ability to grow up to three levels, boosting their powers each time. In Normal Game, this occurs gradually by collecting food items or by finishing levels, while in Battle Game, the player needs to collect more eggs.

Dinosaurs can be dismounted at any time by holding both

Saturn Bomberman is divided into three modes of play, though each mode plays in the traditional Bomberman fashion.

As well as offering a single-player campaign, Saturn Bomberman is notable for its multiplayer options, allowing up to 10 human players to compete on-screen through the with the use of the 6Player (and in Japan, Hudson made its own Bomberman-themed one). Even today some modern iterations of Bomberman lack this feature. Online play can be found in the the US and Japanese versions of the game, though the European version does not support this feature.

Normal Game is the story mode for Saturn Bomberman and supports up to two players. Players take control of White and Black Bomberman and must play through a series of levels based around different time periods.

The main antagonists are the Hige Hige bandits, who have gone on to be featured in other Bomberman titles and animated series including Bomberman Generation, Bomberman Jetters and more.

Battle Game serves as the multiplayer mode that goes up to 10 players through the use of two 6Players. You can also set up a series mode that allows specifications such as how many players playing, which stages are played and the rule set. In the US and Japanese versions of the game, players can make use of the Sega NetLink modem and link up one other system with up to 2 players per console for up to 4 player multiplayer online, and like all other Netlink games can now be played over a high speed internet connection with Voip.[11]

Depending on how many players are allowed to play determines which stages can be selected. Up to 8 players can choose from any of the gimmick stages. 10 player matches can only be played on the Wide Stage. This stage appears zoomed out to accommodate for the additional players and does not feature any gimmicks.

Instead of using differently colored Bomberman, players can choose from White and Black Bomberman as well as a host of other Hudson Soft based characters and mascots.

When playing online, players are split between two teams with up to two players each. Red Team plays with White Bomberman and Miss Honey. Blue Team plays with Black Bomberman and Kotetsu. If one team has two human players and the other only has one, the remaining slot will be replaced by a computer controlled teammate. Maps are selected at random.

Master Game is similar to Normal Game that supports one player only. Players play as White Bomberman and go through twenty rooms. At the end of the game, players are graded based on their performance.

During development, Saturn Bomberman was known by the working title Bomberman SS. 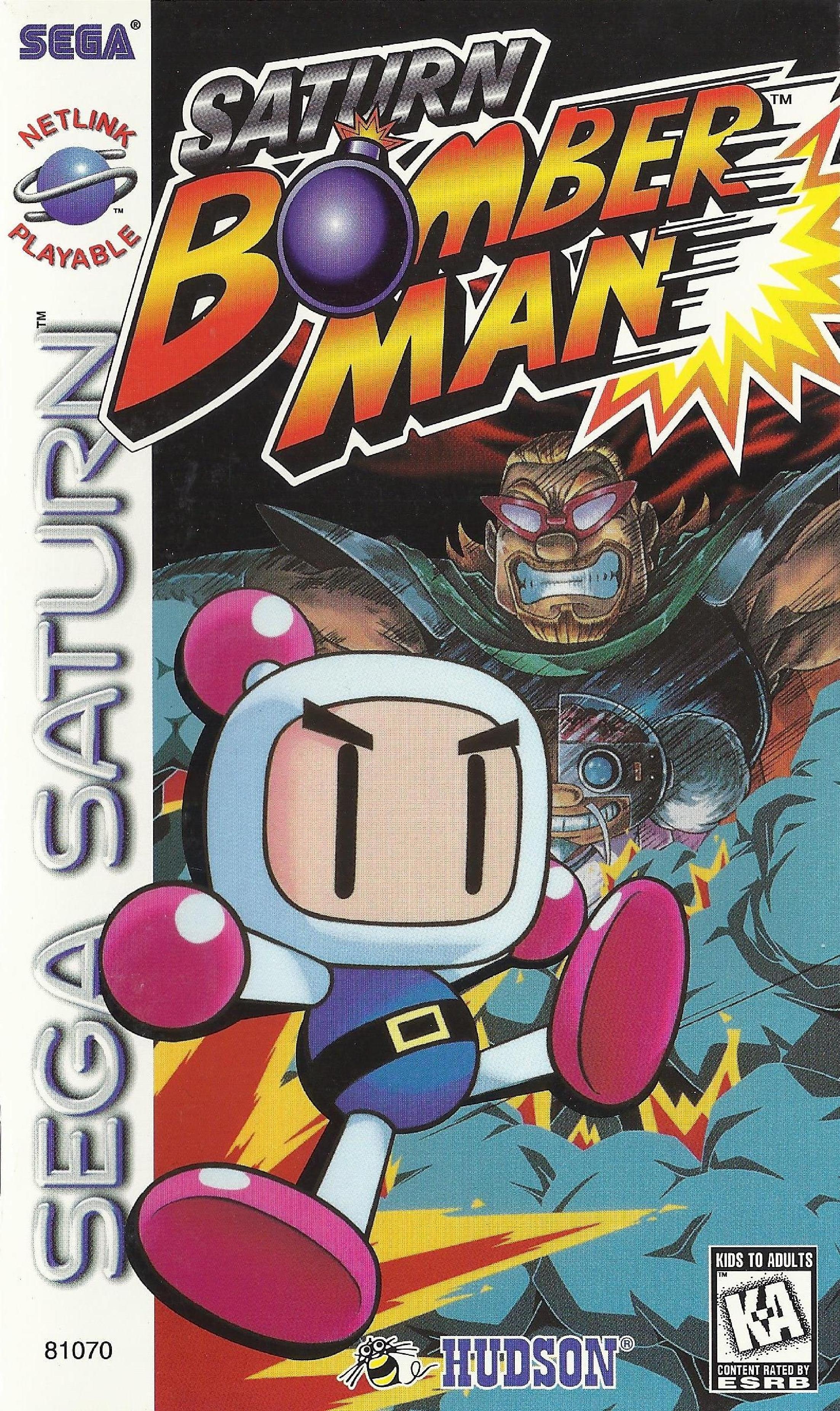 Saturn Bomberman makes use of the Saturn's internal battery back-up as well as the Saturn Backup Memory to save data for all three modes.