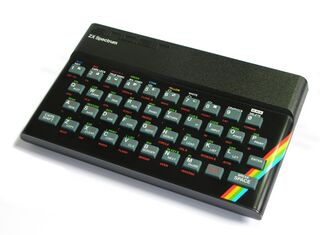 The ZX Spectrum is an 8-bit home microcomputer released by Sinclair Research in 1982 as a successor the the ZX81 and ZX80.

The Spectrum was the most successful home computer in the United Kingdom (where it was predominantly sold) for most of the 1980s, with over five million units sold (not including Spectrum hardware clones). Over 24,000 software titles have been released for the platform, including about 10,000 games,[1] of which over 2,000 were published games.[2]