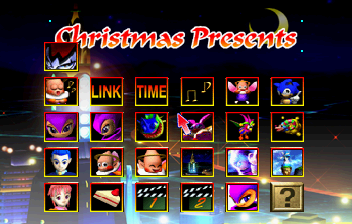 The full set of (Christmas) presents.

If not played over the winter months, Christmas NiGHTS defaults to "NiGHTS: Limited Edition" and essentially acts as a no-frills demo. Between November and January it is "Winter NiGHTS" and during December, "Christmas NiGHTS".

Due to its freebie nature, Christmas NiGHTS is a much smaller game than NiGHTS into Dreams - there is only one level (Spring Valley - almost identical to the level seen in regular NiGHTS, complete with boss, Gillwing) however unlike the original it is playable as Elliot as well as Claris. When playing as Elliot the stage (and boss fight) is mirrored.

Christmas NiGHTS is Christmas-themed, and so its graphics and music have been replaced with winter-esque versions of the original stage (but only in winter). For example, Ideya Captures are now giant floating Christmas trees, and NiGHTS wears red attire rather than purple. Gameplay is otherwise identical to the base game, including the A-Life system altered by defeating enemies.

On New Year's Day, there is a change of title screen and the children wear different outfits, and on April Fools' Day, users can play as Reala instead of NiGHTS. Reala can be played at any point after the latter event is seen.

There are 25 unlockable "(Christmas) Presents" in Christmas NiGHTS. Most are achieved by beating the stage and playing a quick tile-matching game, though others (such as the last one, "Christmas NiGHTS") are unlocked depending on date.

The visuals of Christmas NiGHTS change slightly depending on the time indicated by the Saturn's (or PlayStation 2's) internal clock.

The period between November and February is the most "active" part of the year, which scenery changing almost at an hourly rate. Note that foreground objects only seem to change when you're close to the hour, otherwise the game will default to snow.

Christmas NiGHTS was not sold in the same way as most Sega Saturn games. 50,000 copies were distributed by Sega Europe[6] as part of special console bundles[7][8], or with the purchase of two select Saturn titles[9], and also as a gift with the first 200 subscriptions to UK's Sega Saturn Magazine during the month of December[10]. According to the then editor of Sega Saturn Magazine, Richard Leadbetter, despite being a free disc Sega Europe still had to pay royalties to Sega of Japan,[11] which is why they initially decided against giving it away as a straight cover disc.[12] However, it would eventually become a cover disc in the December 1997 issue of Sega Saturn Magazine.

In Japan, it was part of a Christmas-themed Sega Saturn console bundle and not sold separately, however it was packaged in a plastic jewel case like the majority of the Japanese Saturn library. In fact, the Japanese Christmas NiGHTS clearly states "only this winter" on the box, and has always been treated as a limited edition of the game.

In North America the game was distributed with the January 1997 editions of Ultra Game Players and Next Generation magazines (with a combined circulation of roughly 100,000 from 15,000 retail outlets)[3], as well as being made available for free rental at Blockbuster Video locations in America[3]. Later the game was given away with the purchase of select Saturn games such as Daytona USA: Championship Circuit Edition. These versions were distributed in a cardboard slip case to cut costs, much like many early Saturn bundles.

Christmas NiGHTS was also included in the PlayStation 2 version of NiGHTS into Dreams. The Saturn disc can also be accessed via a Windows PC for extra content, similar to other Sonic Team games.

The game makes use of the Saturn's internal battery back-up as well as the Saturn Backup Memory cartridge to save progress and unlockable content. In addition, you can link save data of Christmas NiGHTS with the retail version of NiGHTS into Dreams and see in-depth information of save data from the retail version.