Pulseman (パルスマン) is a Sega Mega Drive action platform game developed by Game Freak and published by Sega. Originally seeing a Japanese-exclusive release in July 1994, it was later brought to North America on Sega Channel in 1995, and eventually released worldwide on Nintendo Virtual Console in April 2007. Though the text of the game is in Japanese, the voice acting is in English.

In 1999, the young scientist and computer engineer Doc Yoshiyama creates a "C-Life," an advanced artificial intelligence, named Amabilis. He fell in love with the C-Life girl he created and digitized and uploaded himself into the computer core to be with her. By combining his DNA and her program core, he created the half-human, half-C-Life boy named Pulseman. Because of his hybrid nature, Pulseman can freely travel between the real world and cyberspace. He also has the power to channel electricity through his body.

In 2015, the evil Doc Waruyama uses a system called EUREKA, which allows for C-Life beings to manifest in the human world, to establish the Galaxy Gang and use it to spread a new wave of cyber-terrorism across the world. Pulseman must put an end to this gang for the sake of the free world. Pulseman is assisted by his girlfriend Beatrice, a C-Life girl who used to be a member of the Galaxy Gang. Beatrice provides Pulseman with information about stages and items and warns him when his health is low.

The English Wii Shop description for the game states that Doc Yoshiyama becomes Doc Waruyama after living in the computer world for too long and becoming twisted and evil.

The game is a platformer. Pulseman moves with

. His walk turns into a run after a short distance. He can perform a Lightning Dash with

, which allows Pulseman to dash a short distance through enemies or over hazards. The Lightning Dash does not harm enemies or move through walls. He jumps with

. He can perform a somersault with

that damages enemies. He does a short-ranged attack with

(or a kick with

). He does a short jump (if not already in the air) and becomes briefly charged with energy with

, which can be used to attack enemies or jump onto wires. Pulseman turns into an energy ball when he jumps onto a wire. The player can use the D-pad to switch onto another nearby wire or press

to jump off the wire.

Pulseman can enter a Sparkling State, in which he becomes imbued with electricity, by running, using the Lightning Dash, or collecting the Voltecc Energy item. While in the Sparkling State, his offensive abilities are upgraded. His basic attack becomes the Slash Arrow, a horizontal projectile, with

. The Slash Arrow can penetrate multiple enemies. He can also perform the Voltteccer with

, where Pulseman turns into a ball of energy and launches at a 45-degree upward angle in the direction that he is facing. He bounces off walls, floors, ceilings, and the sides of the screen while in this state. He is invincible while in this state and damages any enemies that he collides with, though there are some enemies that can take him out of this state. The Voltteccer allows Pulseman to access areas that are normally inaccessible since it reaches higher than his jump, can break through certain blocks, can bounce off spikes, and can fit through narrow spaces. The state normally lasts a short time, but bouncing off surfaces extends its duration. Pulseman can stay in this state indefinitely if caught between surfaces, but he can exit the state manually with

. The Slash Arrow and Voltteccer can both be done in the air after jumping. Pulseman loses the Sparkling State after using the Slash Arrow or Voltteccer, unless he has the Voltecc Energy item.

Pulseman cannot use his abilities in water, though he can still hit enemies at melee range with

. Water dissipates his projectiles and interrupts his Voltteccer and Sparkling State.

Pulseman's health is indicated by the color of the circle in the top-left corner of the screen. It is blue at full health but then turns yellow and finally red as he takes damage from enemies or hazards. If he takes additional damage while it is red, he loses a life.

In between stages, Pulseman plays a bonus stage where he uses his Voltteccer ability to try to break all the blocks before time runs out, similar to Breakout and Arkanoid. The player can move the paddle with

while Pulseman is in his energy ball form, which catches Pulseman and allows him to launch his Voltteccer again.

In development, the game was originally known as Spark (スパーク).

Many of Pulseman's staff, including director Ken Sugimori and composer Junichi Masuda, would go on to produce the world-renowned Pokémon series.

In February 2007, fan translation group M.I.J.E.T. released an English translation of the game.[9] 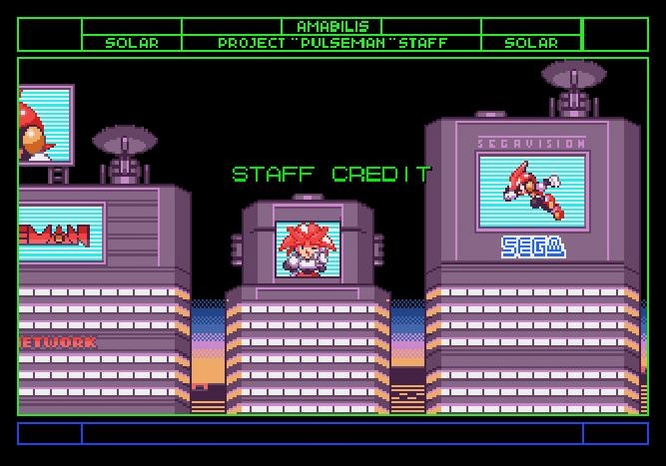