Ax Battler: A Legend of Golden Axe (アックスバトラー ゴールデンアックス伝説), known in Brazil as simply Golden Axe, is a Sega Game Gear platform role-playing game developed by Aspect and published by Sega. It was first released in Japan in November 1991.[1]

The game is a sequel to the Sega Master System action role-playing game Golden Axe Warrior. Similar to how that game is highly derivative of the popular 1986 game The Legend of Zelda, Ax Battler derives its design from that game's sequel, Zelda II: The Adventure of Link.

Death Adder is laying siege to the entire world. He steals the Golden Axe, a magical weapon that grants its wielder unimaginable power, from its hiding place in Firewood Castle. To prevent Death Adder using its powers to destroy the world, the King of Firewood Castle calls upon the help of his strongest warrior: Ax Battler.

The game consists of overhead RPG segments exploring an overworld and towns interspersed with side-scrolling battles and stages.

As the player traverses the overworld, enemies randomly attack, prompting the game to switch to a side-scrolling battle scene. Ax Battler must defeat the enemy by striking it or using magic abilities until the enemy runs out of hit points. If Ax Battler is hit by the enemy, he loses a hit point and the encounter ends; if he defeats the enemy, he collects magic vases, which are the game's currency.

The player can find and enter towns from the overworld. Towns usually contain an inn where Ax Battler can rest and replenish his health for a fee, a training house where Ax Battler can learn a new ability if he wins a battle, and a password house where the player can receive a password for continuing the game at a later time. The player can talk to NPCs that sometimes provide hints. The overworld also contains special landmarks, which are side-scrolling platforming stages that the player must complete to collect an item to advance or to travel to a new location.

(or dismiss the menu with

) to talk with NPCs, use an item, or search the area. The player can open a status screen with  START  that shows Ax Battler's health, the amount of vases collected, and the special attacks learned. The player can also choose a magic technique from this screen.

In the side-scrolling action scenes, Ax Battler moves with

, which can be done while crouching or jumping. He can use a magic technique with  START  (when standing on the ground).

Health for both Ax Battler and his foe (in a battle scene) is indicated by rectangles at the bottom of the screen. An orange rectangle represents one hit point and a blue rectangle represents two hit points. Ax Battler has a maximum of six hit points. If he loses all of them, he is defeated and revives in the password house of the last town visited; the player can choose to continue the game if desired. Though Ax Battler retains the special attacks he has learned and the items he has collected, he loses all of his vases after continuing.

Magic abilities are all initially available and can be selected through the status screen from the overworld.

Ax Battler learns special attack skills from training houses in each town. These abilities work in both the battle sequences and the platforming stages. Some abilities are necessary to learn in order to complete the game.

Items are usually necessary to progress. 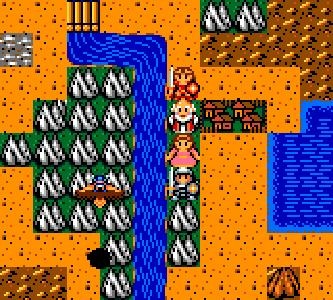