Dinosaurs for Hire is a Mega Drive game based on the comic book series of the same name. It was only released in North America.

The "dinosaurs" are actually intelligent aliens who resemble smaller versions of Earth dinosaurs. After their spacecraft malfunctions in Earth's atmosphere and crashes into the ocean, they are stranded on Earth and become mercenaries for hire.

It is a side-scrolling run-and-gun game similar to Contra but involving a group of dinosaurs who fight crime. The game mostly involves blasting enemies as they pour in, but there are also some platforming elements. The players can choose from one of three dinosaurs, who all play the same. In two-player games, each player chooses a different dinosaur. The dinosaur is moved with

and lies down with

. The dinosaur jumps with

and can jump slightly higher with

. The dinosaur has a gun that can be aimed in eight directions with the D-Pad and fired with

. The gun can be upgraded by finding items. Each dinosaur also has a close-up attack with

. This is the often the easiest way to attack smaller enemies or enemies that come within the minimum range of the dinosaur's gun. Guns can be fired while lying down or jumping, but the close-up attack can only be done while standing. Both can be done while moving, but the dinosaur stops to do the close-up attack. The dinosaurs can jump off and on platforms and between the foreground and background layers of some stages with

and can climb ladders with

. The dinosaurs also have a "dino smash" attack that can be done by holding

Dinosaurs also have a Smart Bomb that can be detonated with

, which destroys all enemies on screen (except bosses, who are merely damaged). Dinosaurs can find more Smart Bombs within the stages and hold up to four. In two-player games, items effects are not shared and each dinosaur has his own stash of Smart Bombs.

The dinosaur has a health bar that goes down as he takes damage from enemies. Dinosaurs are also injured from falling from heights. When the health bar is emptied, the dinosaur loses a life and restarts the level if he has an extra life remaining, losing any weapon upgrades he may have. If he has no more lives, the game ends but can be continued if the player has continues remaining. There are items that replenish health or give extra lives. In two-player games, the players have separate health and lives but share continues. Players are revived in place (rather than the beginning of the level) when they die. However, if one player dies with no more remaining lives, the player cannot be revived until the other player gets a game over and uses a continue.

Items are usually found in capsules that must be broken open first. 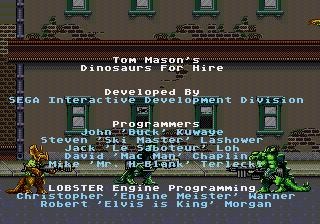