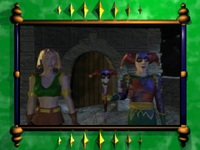 In the land of Lyr, an unpopular carnival jester called Fargus and his stick-puppet Sid, are seeking a new career. Meanwhile, a talented acrobat named Nikki, bored of carnival life, runs away to pursue her dream of being a wizard. Fargus, Sid, and Nikki meet at a "Wizards in Training" seminar at Lancelot Castle. Bored by the seminar, Nikki and Fargus steal the speaker's spellbook during a break and take it to the high balcony overlooking the village.

When Nikki begins practicing with the magical book, Fargus and Sid urge her to perform a "tenth-level spell." With a few magical words, a green monster called Yungo appears and consumes the entire village. They search the book for how to get rid of the monster. The book reveals that they will have to obtain a wish from the Wishing Engine. With a map from the book to help them, they set off on their journey. 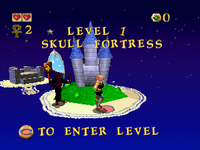 The game is a "2.5D" platformer; gameplay is two-dimensional but the graphics are rendered in 3D with polygons. Players play as Fargus or Nikki, who are trying to reach the Wishing Engine so they can wish the town back to normal. The goal of each level is to make it to the end, collecting coins and defeating enemies along the way. There is a boss fight after every six levels.

Players choose a character before each level; both play similarly. Characters move with

. Enemies are generally defeated by jumping on their heads; some take multiple hits to defeat. Nikki can perform a double jump by pressing

again in midair before the apex of the jump. Fargus can tumble with

, which can be used to attack enemies or can be done in midair to increase the length of his jump. Characters can obtain power-ups that give them projectile attacks, which are fired with

. The power-up effect is lost if the character takes damage.

Characters have hearts that indicate their health. They lose a heart whenever they take damage from enemies and lose a chance if they run out of hearts. Losing a chance starts the character over at the beginning of the level or the last checkpoint. The game ends if the player runs out of chances. There are items that replenish lost hearts or permanently give the characters more hearts. The player can obtain extra chances by collecting coins in the levels. The game uses a password system for continuing. 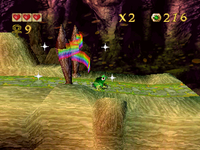 Some levels contain special gates that, once passed through, transform the character into an animal.

Levels are selected from a map screen and can be replayed after they have been completed.

The game received a sequel, Pandemonium 2 (called Magical Jumpers in Japan), released in 1997 for the PlayStation and PC, but it was not ported to the Saturn.

The Japanese version of the game, Magical Hoppers, replaces the main characters Fargus with Clam (クラム) and Nikki with Guppy (グッピー).