Rock the Rock, known in Japan as Sekai Taikai Rock the Rock, was an American video game tournament organized by Sega of America in promotion of upcoming release of Sonic & Knuckles.

Rock the Rock began on Saturday, October 8th with a one-night international Sonic & Knuckles tournament, with over 40 tournament locations assembled at numerous Hard Rock Cafe restaurants and Sega-associated venues around the globe - over a week and a half before the game's American release. Dubbed the "Sonic & Knuckles International Preliminary Tournaments", up for grabs was $25,000 awarded directly from Sega of America, as well as every product the company produced for the next two years.[2] [3] Of the roughly 100,000 participants, fifty winners were chosen to compete in the tournament proper, along with five more selected randomly from a 1-800 telephone number.[1] 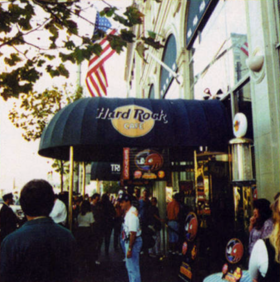 Over 100,000 players participated in the worldwide invitational tournaments.

Winners were handcuffed to briefcases containing copies of Sonic & Knuckles (theirs to keep[4]) and accompanied by "police" escort to their awaiting limousines - each followed by a Brink's armored car - where they were driven to the nearest airport and immediately flown to California's San Francisco Bay Area. The following morning, participants were shuttled from their hotel to San Francisco's Pier 41 by another security-escorted motorcade and ferried over to the city's famous Alcatraz Island.[1] Sonic the Hedgehog series co-creator Yuji Naka was in attendance for both the Yokohama Joypolis invitational tournament and the Alcatraz Island finale, congratulating both winners on their respective victories.[5][6]

The tournament proper began with 55 participants placed at their own Sonic & Knuckles-equipped Sega Genesis kiosk and housed within Alcatraz' New Industries building, each tasked with collecting as many rings in Mushroom Hill Zone Act 1 in 3 minutes. Of these, the top ten contestants with the highest ring counts were giving placing scores, and with the top two contestants - Mark Guinane and Chris Tang - proceeding to the final showdown.

Finalists Mark Guinane and Chris Tang were then led to a specially-constructed kiosk in the plaza of the island's nearby Model Industries building, where both contestants were again given 3 minutes to collect as many rings as possible, this time in Launch Base Zone Act 1. In the end, Tang won the tournament with a total of 153 rings to Guinane's 123. Soon after, at a promotional Sega of America press conference at the company's headquarters, he was presented with a large novelty check for $25,000 directly from Tom Kalinske, as well as every product Sega of America made for the next two years (also received by Mark Guinane).[2] 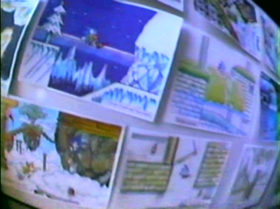 Concept art for Sonic the Hedgehog 3 shown during the Sega Technical Institute segment.

On Monday, October 17th, over a week after the tournament's conclusion, and one day before the release of Sonic & Knuckles, MTV aired Rock the Rock as a 30-minute television special.[1][7] Hosted by American celebrity personalities Bill Bellamy and Daisy Fuentes, the special featured an edited version of the tournament produced in Sega of America's trademark frantic, hyper-focused style, interspersed with information about the game and brief interviews with contestants.

After introducing the premise of the tournament and some primers on Sonic & Knuckles, the special cuts to a segment in which Sega Technical Institute staff are interviewed about the upcoming title. Roger Hector, Adrian Stephens, Howard Drossin, Kunitake Aoki, Chris Senn, and Dean Lester are all given brief screen time, along with appearances from Sega Test's Aron Drayer, Janine Cook, Marcus Montgomery, and Tracy Johnson. During these interviews, a number of never-before-seen pieces of Sonic the Hedgehog 3 concept art are quickly displayed.