Sega Smash Pack Volume 1 is a Sega Dreamcast compilation of twelve earlier Sega games. Ten of these games were originally released for the Sega Mega Drive. This compilation was only available to certain bundled Dreamcast systems, although there were plans at one stage to release it separately later[3].

This is the third compilation to be released that was titled Sega Smash Pack; the first two were released for PC. When released, the game was criticized for its poor emulation and the poorly reproduced music featured in the games. The game's disc (GD-ROM) contains a text document that elaborates on the emulator and includes text that alludes to Sega's dropping out of the console business. 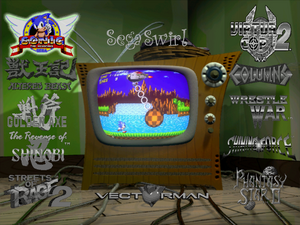 Sega Smash Pack Volume 1 can utilize VMU storage to save emulator configurations as well as save data for Phantasy Star II, Shining Force, Virtua Cop 2 and Sega Swirl. The compilation does not combine all save files into one file due to the varying sizes.