Target Earth, known in Japan as Assault Suit Leynos (重装騎兵レイノス) is a Sega Mega Drive run-and-gun game developed by NCS. The first game in the Assault Suit series, it was originally published in Japan by Masaya in March 1990[1], and was brought to the United States three months later by DreamWorks.[4]

In 2201, expanding technologies have given man the power to live anywhere in space. Earth and its colonies are fighting a war against a cyborg army returning from deep space. The nature and purpose of these cybernetic adversaries, named Chron, is initially unknown. However, it is later revealed that Chron are the survivors of a failed space expedition (Outer Space Expeditionary Party) sent by Earth a hundred years earlier.

The Earth Defense League fights to defend Earth. Its core is the Assault Suit, a twelve-foot-tall armored battle machine with powerful fighting capabilities. The player is Rex, an Assault Suit Wing commander and master at Assault Suit combat. The battle begins on Ganymede and shifts to battles in space, on the Earth, and inside enemy outposts.

The game is a run-and-gun platformer played as the Assault Suit Wing commander Rex inside a large armored mecha. Allied forces appear within the stages and fight alongside Rex. There is no friendly fire. Fellow Assault Suit Wing troopers wear brown armor and fly white or brown spacecraft. The Chron enemy forces wear green or blue armor. Characters occasionally send transmissions during stages to state the current objectives or progress the story. The goal of each stage varies and can involve defending a friendly ship or destroying an enemy target.

In gravity stages, Rex moves with

. He jumps higher if the button is held for longer. When equipped with a B-Pack, Rex can fly for short durations by holding

. In space stages, Rex can move freely in any direction with the D-Pad.

Rex fires his weapon with

, which can be held for rapid-fire. Weapons are aimed in eight directions using the D-Pad. There are multiple weapons, and the player can switch between the equipped weapons with

or by pausing the game with  START  and using

. The LG-Gun and HG-Gun weapons reload after their ammunition runs out, but the other weapons are unavailable for the rest of the stage when they are depleted.

At the start of each stage, the player can choose which weapons and other items to equip. An item is selected with the D-Pad and equipped with

; the last item is unequipped with

. Up to six different items can be equipped at a time. The player's performance in a stage determines which additional weapons and items are rewarded at the end of the stage. The player can acquire and equip the same weapon multiple times to carry additional ammunition. If a weapon runs out of ammunition in one stage, it is still available to be equipped in the next stage with full ammunition.

Rex has a health meter that empties as he takes damage from enemy fire or contact. It starts with 16 bars, but it can be extended as long as 32 bars by equipping Armor items. The health meter replenishes over time if he avoids taking damage. The game ends if he loses all of his health. There are three selectable difficulty levels (Normal, Hard, and Hyper). There is also an option to enable resetting the game with

These item effects are always active when equipped.

The game was included on the Japanese and Asian releases of the Mega Drive Mini in 2019. The US version is accessible if the system is set to English.

A sequel, Assault Suit Leynos 2, was released for the Sega Saturn in 1997. It was only released in Japan. 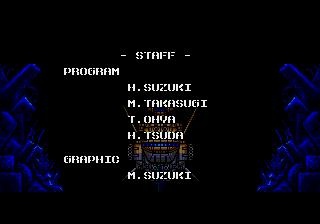