Virtua Tennis 2, known as Power Smash 2 (パワースマッシュ２) in Japan, is the direct sequel to Virtua Tennis. It was developed by Hitmaker and published by Sega in 2001 for Sega NAOMI arcade hardware as either a ROM board or a GD-ROM before being brought to the Sega Dreamcast and later PlayStation 2.

Virtua Tennis builds on the gameplay found in its predecessor, and adds the option to play as female professional tennis players and mixed doubles matches. It is compatible with the PlayStation 2's multi-tap peripheral, allowing for four players to play at once.

In North America, the title of the Dreamcast game is Tennis 2K2, carrying the Sega Sports license. This was done so that the names matched with other sports games published by Sega, including World Series Baseball 2K2 and NFL 2K2. As the PlayStation 2 version was released in the second half of 2002, the game was simply renamed Tennis, as it would have appeared outdated in a matter of months. The PS2 version also exchanges Jelena Dokić of the Federal Republic of Yugoslavia for Ai Sugiyama of Japan.

For its PlayStation 2 release in Europe, publishers Acclaim Entertainment planned to release 20 spray-painted homing pigeons at Wimbledon 2003. The birds would fly to the courts during the day, flapping the logo in front of fans during warm-ups, and return to a "secret location" in south west London at night. The water-based paint used was said to be harmless[9].

While the planned stunt generated some headlines at the time, it is not known if it ever went ahead. The Lawn Tennis Association, which manages the Wimbledon tournament, usually hire hawks too keep pigeons away so as not to distrupt play (although they are not always successful). Acclaim did however have form for controversial marketing practises, offering rewards to those who would willingly engrave ShadowMan 2 onto recently deceased gravestones, naming their newly-born babies "Turok" for Turok: Evolution and offering to pay any speeding fines incurred on the launch date of Burnout 2: Point of Impact. 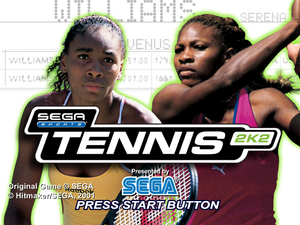 Sega of America
Source:
US manual