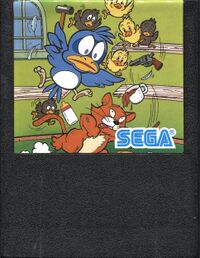 The limited distribution of the SG-1000 mean that only a handful of SG-1000 games were released, many of which remained exclusive to Japan. Like its successor, the Sega Master System, the SG-1000 had games distributed both on cartridges and Sega Cards.

There are about 75 official SG-1000 games, 67 from Sega, and 8 from Tsukuda Original. The true number of games is unknown - Aaronix for example ported several MSX games to the system for Taiwan, and as official programming software was released to the general public, it is possible that many games exist on cassette.

All cartridges are all compatible with the SG-1000 II, Othello Multivision, SC-3000, Sega Mark III and Japanese and Asian Sega Master Systems. They are not compatible with the Power Base Converter, and systems lacking a card slot can use the Card Catcher add-on.

This category has the following 20 subcategories, out of 20 total.