McDonald's Treasure Land Adventure (マクドナルド トレジャーランド・アドベンチャー), written in the United States as McDonald's Treasureland Adventure, is a Sega Mega Drive platform game developed by Treasure and published by Sega. Endorsed by and based off characters from American fast food company McDonald's, the game was first released in Japan in September 1993, was later localized and brought to the United States three months later, to Europe six months later, and was eventually published in Australia and Brazil later that year.

Ronald McDonald, the mascot of the McDonald's chain, discovers a piece of a treasure map while walking in the Magical Forest one day, and decides to go on a treasure hunt with it. There are three other map pieces, each in the hands of villains Ronald must defeat on the treasure hunt he decides to take.

The game is a platformer played as Ronald McDonald. It has four worlds, each split into a number of smaller stages. The object of each stage is to get to the exit that leads to the next, avoiding hazards and destroying enemies on the way. Ronald walks with

and jumps down from some platforms with

. He has a magic attack performed by pressing

, which can be upgraded by collecting certain power-up icons. This attack can be done while crouching or jumping. Ronald has a magic scarf that can be thrown upwards with

to hang from handles. He holds the scarf out while the button is held and springs upwards past the handle when the button is released, which can be used to reach higher platforms.

Ronald's health is measured in a meter of magic jewels in the bottom-left of the screen. A special power-up can increase the number of jewels that can be held at one time, increasing Ronald's maximum health. If Ronald loses all of his jewels, he loses a life. Yellow and white flowers can also be collected, and if Ronald collects two yellow flowers or three white flowers, he earns a jewel back. If he is at full health, the flowers are stored until Ronald takes damage, giving him an extra hit. Ronald can also collect balloons, activated when he falls into a pit, using them up and floating Ronald to safety instead of having him lose a life.

Certain doors, when entered, lead to a shop where Ronald can use collected gold to purchase extra power-ups, like jewels, flowers, and extra lives. Other doors lead to a bonus game where the player must control and rotate falling blocks, matching the shapes on them to earn extra power-ups.

Near the end of each world, Ronald meets another McDonald's character, who requires a few jewels before opening the path to the world's boss. Each boss is fought by dodging their attacks, moving into their jewel-stealing beam, and attacking them while they are eating a jewel.

Items are found in the stages, purchased from shops, or sometimes released by enemies after they are defeated.

Some doors found in stages lead to the bonus game, which the player can play in exchange for 2,000 gold.

The game is a falling-tile puzzle game similar to Columns or Puyo Puyo. Groups of three tiles fall from the top of the well and must be placed by the player. The tile groups are be moved with

and rotated clockwise with

. The player must match three tiles of the same kind in a row (horizontally or vertically) or diagonally to eliminate them. The tiles correspond to items in the game, and eliminating three sets of matching tiles awards the player with that item.

Tiles are under the effect of gravity, so they separate and fall to fill in any gaps after being placed or eliminated. This allows for chain reactions. Skull tiles cannot be eliminated. The game ends if the well fills and the player cannot place any more tiles. 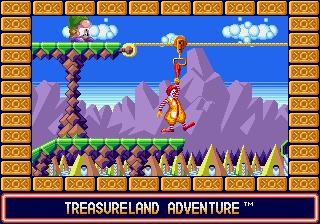