Scud Race Plus (スカッドレース プラス) is an update to Scud Race and was released for Sega Model 3 arcade hardware in 1997. It is a bizarre and somewhat rare update to the game, being released exclusively in Japan. Despite this, it is possible to change the region of Scud Race Plus, and if switched to US it will create Sega Super GT Plus.

Scud Race Plus is very much the same game as Scud Race, but some features are added. 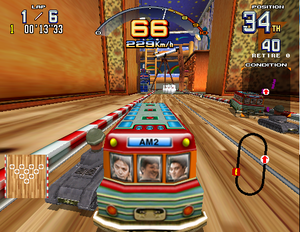 Super Beginner is an oval track in which the players race across the floor of a house. Part of this track houses twelve bowling pins which can be knocked down for extra time, as well as the occasional visit by a cat chasing a mouse.

Unlike the other four tracks, Super Beginner does not have the player compete against other Supercars (though there is one oppoent Porsche 911), but instead buses, tanks and rocket cars. Extra cars has the special features by  START . Computer opponents use this features too.

A larger and heavier vehicle with the ability to knock others off course (the downside being low acceleration and a low top speed).
Special features: Sounds horn.

Smaller and low top speed.
Special features: Fire cannon. The tank comes paired with an extra points counter which is increased when opponent vehicles are hit.

The fastest car in the game.
Special features: Boost three times during the race.

The concept of racing as animals via secret codes, however, isn't new for AM2 racing games: Daytona USA gave racers the ability to play as a horse, and Manx TT Super Bike allowed users to ride sheep.