Characters which did not exist in the original Virtua Fighter do not get their own stages, with the arenas instead being recycled. 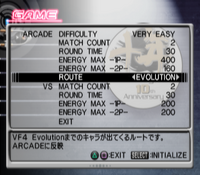 Arcade mode has two battle routes, which can be switched in the options menu.

10th Anniversary's release is not straightfoward. It was originally released as part of the Virtua Fighter 10th Anniversary: Memory of Decade package (which also contains a book and DVD video) in 2003 - copies which are very rare and feature Jacky Bryant on the cover. More common is the "Fukkoku Ban" (復刻版) re-release with Akira Yuki on the cover - these were bundled with Japanese copies of Virtua Fighter 4 Evolution and also given away as a bonus for those pre-ordering the PlayStation 3 version of Virtua Fighter 5 through the Sega Direct website (remembering that at the time, all PlayStation 3s could run PlayStation 2 games).

In North America, the game was included on the same disc as the PlayStation 2 release of Virtua Fighter 4 Evolution, and in Europe it was offered as a promotional item in small supplies. European copies in particular have become extremely rare which has pushed up the game's value.