PlaySEGA was an official Sega website that featured a variety of flash games and an in-browser Mega Drive emulator. Guests were able to play flash games for free, however you needed to be a registered user to play Mega Drive games or flash games with user-created content. "VIP" users (i.e. those who had a payed subscription to the service) could create their own levels for a special version of Sonic the Hedgehog, and would also receive a PlaySEGA USB joypad. The site would be quietly closed in June of 2011, with the site displaying a "maintainance" message until around 2013, when the site then started to return an error. SEGA is still in ownership of the domain name and most related PlaySEGA domains.

Playsega.com was registered by Sega on November 14, 2002, previously being registered to an unrelated company. In 2003, PlaySega launched as a hub for the European releases of Phantasy Star Online Episode I & II and Phantasy Star Online Episode III: C.A.R.D. Revolution. Players of either game were entitled to 30 free days online per legitimate copy. After these 30 days, users must purchase a "Hunters License" which serves as the online subscription for the game (which would need to be payed on-top of broadband fees). Both a 30 day and 90 day pass could be purchased through the website. In 2005, the service was updated to support the purchase of Phantasy Star Online: Blue Burst and Phantasy Star Universe in 2006 while Episode I & II support was removed in 2008.

Once registered, users could play Mega Drive games through a browser-based version of jEnesis. Available games are as follows[1][2]:

This list intends to include all flash games which were once available at PlaySEGA. Some of them may not be available on the service anymore: 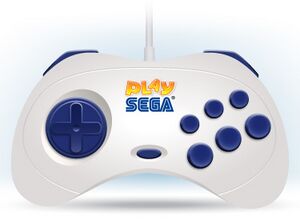 Subscribers, or "VIP" members, are given access to level editors for Sonic the Hedgehog Level Creator (a special flash version of Sonic the Hedgehog) and Stuntmaster Motocross 2. They are also given a free PlaySEGA USB joypad contingent on subscribing for at least 3 months, which costs £12.99 or US$14.95. However, there is a shipping fee. Additional joypads may be purchased for £8.99.[1] [1] These joypads were heavily faked, and official joypads are difficult to find.

Signing up for a free 5-day trial gives you temporary access to the level editors. Anyone may play levels created by VIP members whether they are subscribers or not, but you will need to register an account (which is free).