Sega Rally 2 (セガラリー２) is the sequel to the critically acclaimed Sega Rally Championship. It was released for Sega Model 3 Step 2.0 hardware in early 1998.

Sega Rally 2 is a direct sequel to Sega Rally and was developed by much of the same team (or at least, those who had moved from Sega AM3 to AM Annex). It follows much of the same structure and shares similar themes to its predecessor, though offers more content and updated graphics and physics to deliver a more realistic experience. Despite this Sega Rally 2 remains an arcade game, where the objective is to race easy-to-drive vehicles against the clock across a series of off-road stages, rather than adhere to real world rallying rules and conditions.

While the tracks were re-worked for Sega Rally 2, all three cars from the original Sega Rally are selectable, as are vehicles from more manufacturers (Peugeot, Subaru, Ford, Mitsubishi and Renault). The game also offers more stages with more variation in climate (perhaps most noticeably, a snow level).

The unseen co-driver returns in Sega Rally 2 (with a different voiceover) but now informs the player of distances towards obstacles and changes in road surfaces. Furthermore there are new types of obstacles such as bridges.

Unlike the original Sega Rally, the arcade Sega Rally 2's selection of cars mostly come from the 1997 World Rally Championship (WRC). On the Dreamcast, cars from the 1998 season were introduced. The first eight cars featured in the arcade version, the rest were added to the Dreamcast version.

Enter the code "ilovesegarally2andsega" and Unlock everything except the bonus car Kerolla WRC.

Development started on Sega Rally 2 in February 1997, following an AM Annex team trip to watch the World Rally Championship. Much of the team had a good interest in rallying, having been to the Monaco and Thailand rally in the months between the two Sega Rally games. There had also been a research period into the Model 3 hardware following the release of Sega Touring Car Championship in October 1996.

Many of the flaws of the original Sega Rally were addressed early in development, not simply because of the new hardware. The designers looked at the beginner track of the original game and noted that most people had difficulty navigating corners, with many crashing into walls during their first run. As a result, Sega Rally 2's easy stage is far more linear. The team had also wanted to put a snow stage in the original Sega Rally but could not convincingly pull it off with the Sega Model 2 hardware. As such, this was one of the first additions to Sega Rally 2.

A car would take roughly two weeks to model, depending on the information received from the manufacturer. Most were built by hand using only photographs as a reference, though plastic models were also created. Originally only four cars were planned, however a choice was made to extend it to six as several of the chosen cars were due to retire from the sport. The Toyota Celica GT-Four and Lancia Delta HF Integrale, stars of the original Sega Rally game, were kept hidden for this reason.

Perhaps unusually, very little of Sega Rally 2 is modelled on the actual experience of rallying. Though some of the team had rode as a passenger in rally cars, none had actually had the chance to drive on a rally circuit. Cars in this game are modeled instead on how a user would expect to drive a car (i.e. more similar to that of normal cars on a road), as in reality rally cars are far too slippy and unpredictable for average users. Some advice was given from professional rally drivers.

Unlike Sega's other Model 3 racer, Daytona USA 2, AI cars in Sega Rally 2 are merely pace-setters, following a specified line throughout and only adjusting their movement based on road conditions.

Fourteen courses were created for Sega Rally 2, however ten of them (including a forest stage) were dropped. Most interestingly is a night-time mountain stage which remained in the game until the very last minute - the game still has the music for it, but the track data is missing. Many of these tracks would return in the home ports (?).

There were a couple of location tests in November and December of 1997, one in Japan at the Gigo amusement centre, and another one in London, UK. The cabinet was designed by Sega AM4 in May/June but the motion sensors were not finalised until near the release date. As such, this feature was absent from the location tests.

Sega Rally 2 was one of the first Sega Dreamcast titles to be announced, and alongside Virtua Fighter 3tb was demonstrated to suggest the Dreamcast could match and exceed the Model 3 board's capabilities, despite only costing a fraction of the price to produce. Its early announcement, however, led to the game being developed in tandem with the hardware, leading to an arguably rushed product that does not fully take advantage of the system's capabilities.

The Dreamcast Sega Rally 2 was originally set to be a launch title for the console, and was first demonstrated in action at Tokyo Game Show '98 Autumn as a rolling demo[18], and appeared noticeably incomplete just weeks before its planned Japanese launch[19]. It was inevitably delayed until January 1999.

In addition to the ported arcade mode, the most notable addition to the Dreamcast Sega Rally 2 is a "10 year mode", which has the player race on many more tracks (or variations of tracks) over a longer period of time. Each "year" has four stages, and finishing in first place (starting from last) awards the player a new car. Also included is a two-player split screen mode, and the ability to tune your vehicles.

16 stages exist in the Dreamcast version, with further choices of weather effects. It was also one of the first console racing games to aim for and regularly hit a 60FPS refresh rate, however in the Japanese version in particular, frame rate is significantly compromised in busy scenes, and often just when turning around corners. Commentators also noticed that often cars do not appear to actually touch the road, hovering just above it.

Several changes were made when bringing Sega Rally 2 to US Dreamcasts, including a slightly altered roster of cars and support for the Jump Pack[20]. However, all planned[7] internet functionality was removed (and continued to be omitted in the PAL version), and while there was a suggestion Sega may have re-introduced the concept in a later release[21], this never materialised. While still an issue, frame rates are said to have been improved over the original Japanese release.

The PAL version lacks a PAL60 refresh rate option in RGB mode, meaning the game is played with borders and at a lower framerate in this mode. A 60Hz signal with correct visuals can be obtained through VGA mode.

The Dreamcast (and later PC) versions of Sega Rally 2 use an illustration by Ikeda Kazuhiro (nickname "Bow"), a Japanese artist renowned for drawing automobiles. 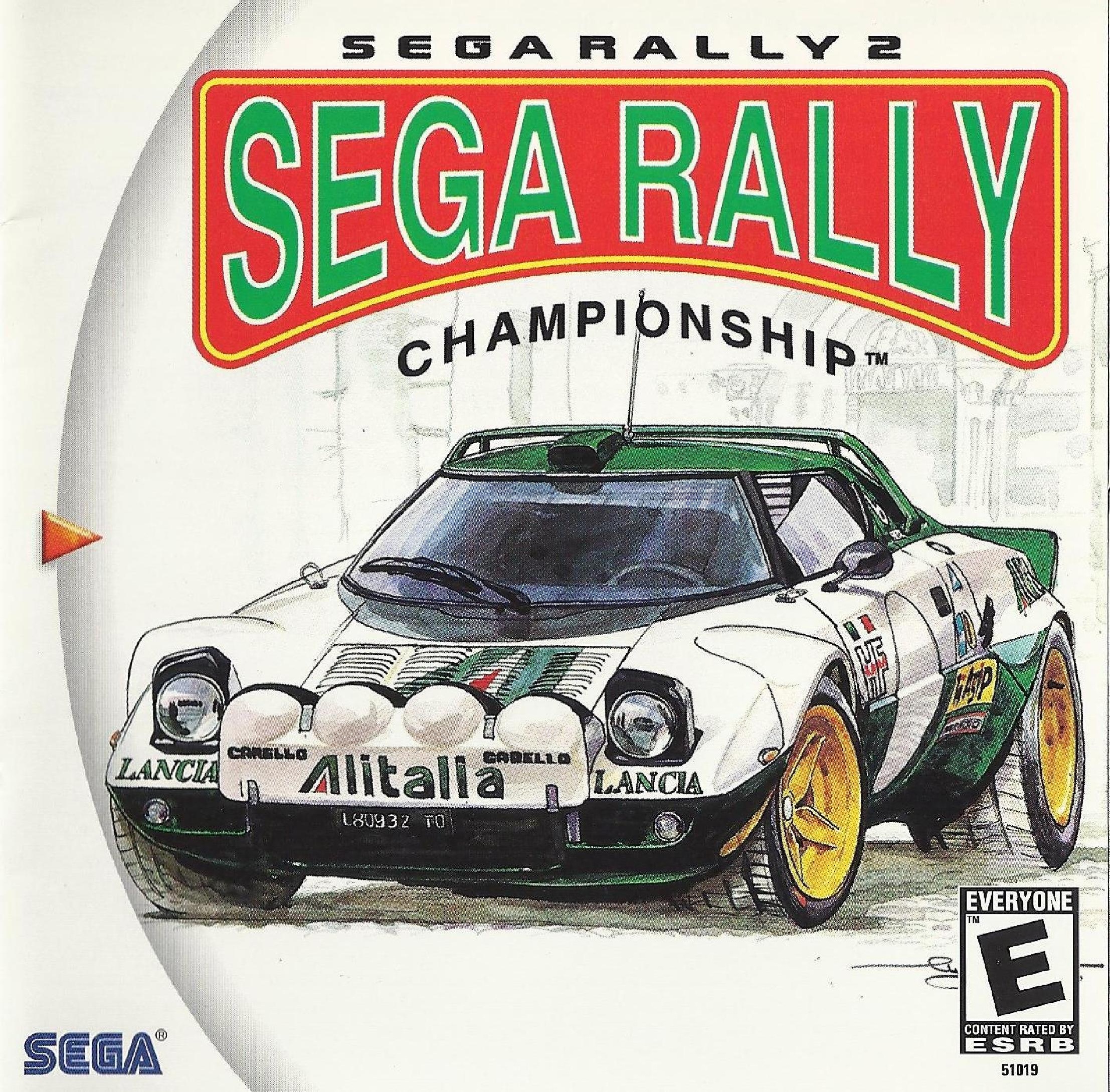