Spikeout: Digital Battle Online (スパイクアウト デジタルバトルオンライン) is a Sega Model 3 Step 2.1 arcade beat-'em-up game, and the first game in the Spikeout series. It has never been ported to home consoles. Spikeout is notable for being the first arcade beat-'em-up whose cabinets could be linked, resulting in a maximum of four players competing on the same level with different screens.

During development the game was known as Spike. It was followed by an update, Spikeout: Final Edition, in 1999. 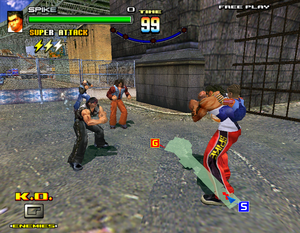 Spikeout is a fully-3D beat 'em up which takes place in huge and sprawling stages – split into sections called Areas, further divided into little segments. Progressing through these "segments" are quite simple; beat up every enemy that appears within one of them. Once enough enemies have been defeated, the player then has to quickly "Break the Gate": Locate a flashing barrier/barricade of some sort (i.e. a door) – in the later Final Edition, with the additional help of a red directional arrow (ala Crazy Taxi) – to punch through to progress to the next segment/Area, within 30 seconds (in which doing so quickly enough will give you bonus points). Due to the semi-open nature of the levels, and the inclusion of multiple Gates in certain stages, it very much acts as a "choose-your-path" system.

Each Area usually ends in a face-off with the "Bosses" – signified by the brief, flashing "Here Comes the Boss" overlay – whom, for the most part, act as mini-bosses. You may face up to three of these bosses at the same time; along with the current enemies in the Area. (Note that once one or many boss(es) appear, you will only need to defeat them in order to clear a segment, and not any remaining enemies.) After successfully clearing an Area, the score results will appear, giving you extra bonus points (and health) for the amount of enemies you've defeated in the Area, and how fast you cleared the last 30-second "Break the Gate" in the Area.

Downed enemies can sometimes drop items such as "Life Up" health kits (which replenish your health) and "Special Attack" items which allow you to perform a "Special Attack"; the latter being represented as floating thunderbolt symbols. Many commonplace objects found within each stage can be picked-up and used as weapons – from baseball bats and swords, to chairs and car tires, to name a few. There's a constant time limit which can be replenished by downing a certain number enemies at a time within each stage – once the timer reaches zero, you get an instant game over. The KO counter on the bottom-left corner shows how many enemies you've defeated within each Area.  START  changes the view of the mini-map on the bottom-right corner.

In addition, Spikeout is also a co-operative multiplayer game; up to four players can join a game, and can do so at anytime. One distinction against other 3D beat 'em up games is that any player in a co-op session can go anywhere within the boundaries of an Area's segment, thereby making it possible for players to stick close to one another and fight together, or to split up and take care of a multitude of foes elsewhere. Friendly fire can also be performed among players if so chosen, and there are also a variety of taunts and commands one can use as means of limited communication with other players.

Spikeout was envisioned by director Toshihiro Nagoshi, while he was still a part of AM2 and sometime after the release of Virtua Fighter 3tb, during which point that arcade games in Japan were slowly beginning to stagnate.

Development began on April 1997[9], with the development team consisting of AM2 team members that worked on Virtua Fighter 3 and Scud Race, with a few from the Fighting Vipers team as well[9]. Special difficulty was reserved for the implementation of the multiplayer network; although the team was already familiar with networking due to their experience with most of AM2's numerous driving games, as Spikeout was a game that featured more "character data" than cars, they endured numerous trials and errors getting it to function properly.

Officially revealed under the working title of "Spike" during a private Japan-only Sega arcade show on May 19th 1998[10], under the AM2 banner, the announced title had two peculiarly ambitious features that were dropped in the final product:

Just before it's release, the game was shown again in playable form at the Amusement Machine Show 1998, still under the AM2 banner.[12][13]

A Dreamcast port of the game was being developed, but never saw the light of day outside of a few copies[14]; with Nagoshi himself stating that the main reason the port was never completed was due to the Dreamcast having insufficient hardware capabilities at the time for such a port[15]. (It would take a full seven years before a consumer-based Spikeout title would be released on a console.)

The engine for Spikeout was later utilized in the Dreamcast game Rent-A-Hero No. 1.[16][17]