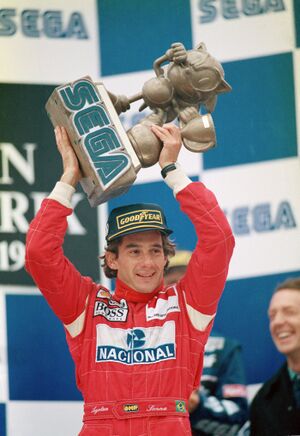 Ayrton Senna holding a Sonic the Hedgehog-shaped trophy after winning the Formula One 1993 European Grand Prix. Sega sponsored the whole event in addition to sponsoring the (winning) Williams team that season.

Over the years, Sega has sponsored many events and services in order to further market its brand or products. Typically, companies such as Sega would invest money in a sponsee, allowing them to fund their activities, in exchange for a prominent display of the brand or products Sega were trying to advertise.

The following lists instances where this has occurred. Not included are cases where Sega has helped established a venture (such as GameWorks or SegaWorld London), only to withdraw their name later on.

Featured were 17 video game banks, with 4-8 Sega Genesis and Sega Saturn systems. Dieon Sanders made an appearance and competed (and won) against Rod Woodson[2]. Other sporting celebrities were also on hand to write autographs[3].

Sega also collaborated with Cartoon Network to advertise the party with call-in contests for tickets and participating Best Buy stores also offered forms for the contest[1].

Sega made available "on satellite" its Super Bowl predictions, using Prime Time NFL Football Starring Deion Sanders to simulate the match. Sega were claiming that with incorporated NFL statistics, the game could predict outcomes with a 85-90% accuracy rate[1].

A set of 12 collectable cards were also released to commemorate the event. The set is unusual in that each card was produced by an entirely different trading card manufacturer, so no two cards share the same design (although they are all the same physical size).

Sega was the official sponsor[6] of the "Regularidad" Classification in the 1993 Vuelta a España. To promote the brand, Sega Spain transformed a big truck with a cargo space of 13,5 x 6[6] meters into an itinerant booth equipped with several Sega Mega Drive consoles for kids to play at no charge, which toured by all the 21 stages of the Vuelta a España, spreading joy among Spanish children.

Sega was the official sponsor of the 1992 LPGA Sega Women's Championship, held at the Eagle's Landing Country Club in Stockbridge, Georgia from April 16 to April 19, 1992[8] and won by American professional golfer and television golf broadcaster Dottie Pepper (competing as Dottie Mochrie).

Sega's Dreamcast console was a sponsor for the kickboxing event "K-1 The Challenge '99", taking place on the 3rd March 1999 at the Yoyogi National Gymnasium in Tokyo, Japan[10]. Dreamcast logos were placed at two of the four corners of the ring. Curiously no kickboxing games were ever released on the console.

A Sega Mega-CD 2 was offered to each of the first three classified of both the halfpipe and streetstyle disciplines.

Formerly considered a "danger" for the concentration of athletes, video games were used for the first time[21] as an entertainment for them in the 1988 Summer Olympics, in Seoul, capital of South Korea, when in an experiment, the International Olympic Committee installed a few consoles and games in the Olympic Village to entertain the athletes.

With the sucess of the experiment, the International Olympic Committee elected Sega Spain as an official sponsor and one of the several providers of entertainment for the 1992 Summer Olympic Games in Barcelona.

Sega set up a 550 m²[22] venue in The Olympic Village of Poblenou (La Vila Olímpica del Poblenou) divided into five zones[23][24][25] (one for athletes only) equipped with 200 Sega Mega Drive Consoles, 60 Sega Game Gear consoles, and 11 arcade cabinets distributed across them.

Despite not being the only entertainment available to athletes and visitors in the Olympic Village, since it was equipped with a cinema, a discotheque, a Scalextric slot car racing track, Karaoke, bars and even had a beach nearby, the venue was a favourite among athletes and visitors with the special arcade cabinet R-360 becoming such a hit that caused enormous queues and forced Sega Spain to implement a minimum of plays per person to avoid conflicts as all the cabinets were put in "free play" mode.

With an attendance of 500 visitors per day, one of the most illustrious of them, in addition to the athletes, was Su Majestad el Rey de España (His Majesty the King of Spain) Felipe VI of Spain (at the time the Prince of Asturias) which was a fervorous fan[26] of the special arcade cabinet R-360, and eventually became an expert in it (he is an aircraft pilot formed in the Spanish Air Force Academy Academia General del Aire in Murcia, Spain).

For the first thirty episodes of the show, several pre-recorded inserts, initially featuring Sonic the Hedgehog and later featuring Sega consoles were screened before and after the segment. These were later changed for a specific and more elaborated insert used until the last episode of the show as part of the European advertising campaign Sega TV (or Canal Pirata Sega as it was known in Spain).

The segment would start with an exclusive Sega promotional opening featuring the title of the segment ¡¡Te Píllé!!, the host of the show Alfonso Arús Leita would then promote the brand giving an insight about Sega and its products while one of his assistants played a game on a Sega Mega Drive, the segment would ultimately finish with a Sega promotional ending in which a Sega Mega Drive, a Sega Master System II and a Sega Game Gear were publicized with the slogan ¡¡Píllalas!! (Catch 'Em!!).

Sega consoles and products were also used occasionally by comedian actors during their performances in the sketches, to promote Sega's brand even further.

The UK VHS and DVD releases of the film contain special Dreamcast-related material.

Sega sponsored a charity event by KIIS-FM at the Irvine Meadows Amphitheater in California.

Sega sponsored the Rock in Wien 1993[38][39][40] rock festival (Rock in Vienna 1993, part of the annual "Rock am Ring" and "Rock im Park" rock festivals founded by German-Jewish concert promoter Marek Lieberberg and held in Germany and Austria since 1985) a.k.a. "Rock auf der Insel" ("Rock on the Island", since Leopoldstadt, the 2nd district of Vienna, together with Brigittenau, the 20th district, forms a large island (Donauinsel[38]) surrounded by the "Danube Canal" and, to the north, the Danube) held from May 29 to May 30, 1993 in Vienna, Austria at the Ernst-Happel-Stadion[41] (formerly known as Praterstadion), a football stadium in Leopoldstadt, the 2nd district of Austria's capital.

Three events hosted by Capital Radio and sponsored by Sega (and Virtua Racing) took place in May 1994.

Sega and the Sega Saturn sponsored the 4-day Pheonix Festival (held in Long Marston, Stratford-Upon-Avon in the United Kingdom) between the 17th and 20th July, 1997.

Hollywood Cars, was an exhibition, held in the Spanish cities of Barcelona and Madrid in 1993, organised by Master Production Entertainment, a company founded in 1988 by Argentinian Businessmen Fernando Quenard and Ignacio Brieva, who creates, develops and consults in innovative concepts in leisure and entertainment (Master Production Entertainment in collaboration with Buenos Aires-based company RobotService, the only company in Latin America dedicated to the design and manufacture of robots applied to entertainment and marketing, founded in 1979 by Argentinian robotic engineer Eduardo Gerardi, was responsible for all the technological contents of the Seville Expo '92).

In 1993, Fernando Quenard and Ignacio Brieva acquired a license from legendary American custom car builder, designer and collector Jay Ohrberg of Jay Ohrberg's Hollywood Cars[45] (formerly Jay Ohrberg's Star Cars) to exhibit his famous collection of unique cars (seen in more than 100 movies, TV shows and videos Jay was responsible for designing and building the vehicles featured in, Batman Returns, The Dukes of Hazzard, The A-Team, Knight Rider, Back to the Future, RoboCop, Ghostbusters, Teenage Mutant Ninja Turtles and several others) and went on a tour of ehxibitions held in Spain and several Latin American countries.

Sega was the official sponsor of booth 5 (the Batcave) in the two editions of the Hollywood Cars ehxibition held in Spain.

The Virtual 2!M[48][49] was an event focused on Virtual Reality and Electronic Art, organized by the Spanish technology company Realidad Virtual S.L. (founded in 1991[50] by José Antonio Mayo, a Spanish science journalist specialized in arts and new technologies, who was co-director of the digital culture and creativity festival Artfutura from 1994 to 2000) a subsidiary of Madrid-based Spanish multinational telecommunications company Telefónica S.A, and directed[51] by Alejandro Sacristán (Alejandro Sacristán Gómez[52], lead vocalist of the legendary Madrilenian electronic music band Aviador Dro[53][54][55][56] since 1980, a year after its formation in 1979, and an Expert in Virtual Reality and immersive digital content, he was a pioneer in the first wave of Virtual Reality, Augmented Reality, Stereoscopy and the 90s Cyberculture movement since 1992, and is currently a curator of the festival Artfutura as well as a columnist for popular science magazine Muy Interesante) which was held from May 2 through May 15, 1993 in a 1000 m² tent located in the Paseo (boulevard) de San Francisco de Sales, in Madrid (a tent previously set up for the celebrations of the V Centennial of the city of Madrid in 1993[48]).

With a cost of 45,000,000[47] pesetas and held as part of the festivities of "Dos de Mayo" (May 2, Madrid's Community Day[57], hence the name of the event) the event was backed by the Council of Education and Culture of Madrid and many other companies including Sega[58] (Sega Spain), which set up two booths equipped with thirty Sega Mega Drive consoles in two of the eight[48] zones of the venue (Zone 2 and Zone 8), to entertain the visitors of the event (a total of sixty consoles).

A television advertisement for Sonic the Hedgehog 2 from Sega's European advertising campaign Sega TV, featured[60] an address for donations to the unit.