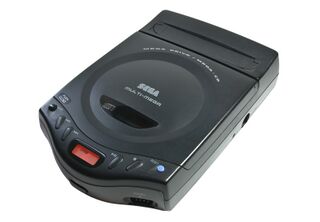 The Sega Genesis CDX, known as the Sega Multi-Mega in Europe, is a Sega Genesis, Sega Mega CD, and personal CD player in one unit. When being used as a CD player, it can run on battery power or the power adaptor. It featured the last version of the Mega CD Bios, v.2.21. SEGA stopped producing the console when 32Xs were being made, and announced the CDX as merely a novelty item, and not intended for the main stream. Like the Sega CD and the Sega Saturn, it is compatible with CD+G discs.

It is about as large as a standard personal CD player, with the only extra size being to fit the Genesis cartridge slot. It's also slightly heavier.

The unit takes a standard Genesis 2 power adaptor, which fits into the top of the unit. It also uses the Genesis 2-style A/V leads, which are connected to the right side of the unit.

The left side of the unit has a 1/8" headphone socket, which works for both CDs and games, and a volume control. There is also a line out socket for hooking up to a hi-fi system.

The front of the unit has controller port 1 on the far left, a power button in the middle, and controller port 2 on the far right. This spacing looks nice, but causes problems with the 4-way multitap. Above this there are the unit controls. From left to right: the Open button for the CD lid, seek buttons for the CD player a small LCD screen in the middle displaying the current track number (including which audio track it's currently playing in-game), or ACCESS when loading a game. Following this are the Play/Pause button and the Stop button, both for CD playback, and a small blue reset button.

The unit itself apparently came packaged with a 6-button controller, a power adaptor, a Red-White-Yellow style A/V cable (probably an RF cable in Europe), along with the Sega Classics 5in1 pack (which contained Streets of Rage, Columns, Super Monaco GP, The Revenge of Shinobi and Golden Axe), Sonic CD and Ecco CD.