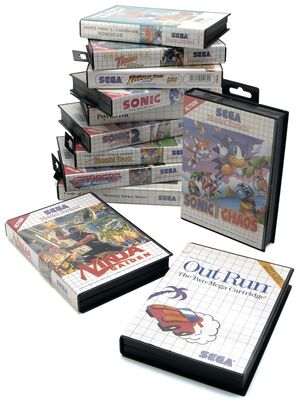 With about 360 Sega Master System games officially released during the console's lifespan (including the Sega Mark III), the Master System has a sizeable set of games in its library, but not as much as its successors.

The majority of the Master System's big hits were ported from the arcades, with Fantasy Zone, Space Harrier, and Out Run being amongst the more well known. Initially, Sega Master System games came in cartridge and "Sega Card" formats; the latter was phased out towards the end of the decade with developers adopting larger game sizes that only the carts could handle. By 1989 and 1991, the console had been phased out in Japan and North America respectively, but support continued to come in from European developers and publishers, and the console was kept alive well into the 21st century in Brazil.

In Japan, games were generally packaged in brown/gold cardboard packaging with rich and colourful artwork. In the west, games were packaged in plastic clamshell cases (which would also be used for the Mega Drive), featuring comparatively dull box art consisting of a grey grid on a white background and a simple graphic pertaining to the game. At first, during its early years in the 1980's, the covers had lots of unused space with only one graphic printed. However, as time went on, the covers became more colorful (especially in Brazil where later boxes were blue). Since 1991 onward in Europe, released games such as Sonic the Hedgehog (8-bit), G-LOC: Air Battle, Mercs, and The Lucky Dime Caper Starring Donald Duck have had their covers composed of a very large graphic of the game covering a majority of it, as well the game's title and the system's name, 'Sega Master System', shown in full on the upper half. Similar aesthetics were applied to the cartridge designs.

With most early Master System games being published by Sega (which at the time were not supporting any other platforms), most of the games announced for the console during the 1980s made it to retail. By the early 1990s it became more common for Master System projects to be abandoned, with Sega focusing its attention on the Sega Mega Drive in Japan and dwindling support for the console in North America. Early missing titles included the likes of Pat Riley Basketball, though with a Mega Drive (or Genesis) version getting more press coverage, these kinds of supplementary releases were perhaps expendable.

The majority of (known) unreleased Master System games were projects started by third-parties, keen to get into the console market, but perhaps not fully aware of trends towards 16-bit machines. Due to the similar hardware, many Master System projects were developed simultaneously with Game Gear versions; a publisher might announce both, and the developer would create two copies of a game, but the Master System version scrapped, as the revenue made would not offset the cost manufacturing and distributing physical cartridges.

This system of developing two games at once meant that the Master System version could be considered a by-product of Game Gear development; an option for publishers to release, but not one that cost extra to produce. As a result, many Game Gear titles may have had Master System counterparts at one stage (particularly those which do not take advantage of the extended colour palette), particularly in Europe where the Master System was still a viable platform for the first half of the 1990s.