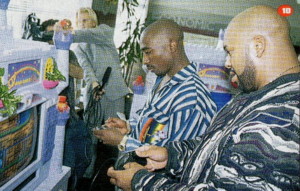 Rappers 2pac and Suge Knight play Sonic the Hedgehog 2 on a Sabriya's Castle of Fun.

Sabriya's Castle of Fun is a Sega Mega Drive kiosk unit produced by the Sabriya's Castle of Fun Foundation and developed in coordination with Sega of America.[1] Conceptualized as part of the Sega Foundation's more direct charitable contributions, the wheeled kiosk consists of a 20" television, NTSC Sega Genesis, AM/FM radio, VCR, dual cassette player/recorder, and a CD player[1], all housed in a child-friendly plastic casing resembling a castle and provided free to various California hospitals in the late 1990s.

Sabriya's Castle of Fun underwent a revision which added a number of additional interactive features to the front of the castle facade (such as openable windows) and eliminated the bottom-half of the unit itself, allowing the hardware to be placed atop any generic rolling hospital cart.[2] 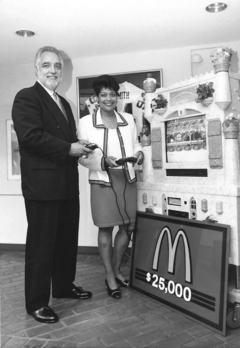 A pair of unknown representatives use Sonic Spinball to officially demonstrate Sabriya's Castle of Fun.

In 1992, a seventeen-year old girl from Southern California, Sabriya Bakewell, was diagnosed with and later died of the blood cancer leukemia. While in the hospital, her family observed that beyond Sabriya's visiting hours and the in-room television, there were otherwise very few personal comforts for suffering patients. Out of this experience, and in honor of Sabriya's life and spirit, her family founded the Sabriya's Castle of Fun Foundation and partnered with Sega of America to both sponsor and collaborate on an all-in-one entertainment kiosk for child hospital patients.[1]

Hospitals generally had multiple units on hand at any time, with maintenance and servicing frequently performed by charitable volunteers.[3]

While intended by Sega of America for use with a Sega Genesis, the hardware does not require any console-specific connections, and other systems such as the Super Nintendo were often utilized instead.[4][5]