Shenmue III (シェンムー III) is a PlayStation 4 and Windows PC adventure game developed by Ys Net and directed by Yu Suzuki. The third entry in the popular Shenmue series, the game was partially funded by a well-known Kickstarter campaign run by Ys Net and Shibuya Productions, and after much anticipation was finally released in November 2020.[1]

The complete story of Shenmue has been laid out over a number of chapters, which are not referenced in the games themselves but have been mentioned by Suzuki and are used in guides to the games as a way to break down the narrative to key moments and locations.

Shenmue tells the first chapter of the series, the second chapter takes place during Ryo's boat ride to Hong Kong which is elaborated upon in a digital comic book included as an extra in the Xbox version of Shenmue II. Shenmue II tells the third, fourth and fifth chapters. Shenmue III will tell chapters six and beyond, picking up immediately after the previous game. It is unknown if the series will end with the third game and it is unknown how many chapters Shenmue III will contain.

Ryo Hazuki has made his way to China in search of his father's killer. At the end of, Shenmue II Ryo had met Shenhua who told him of a legend from her village that foretold of their meeting. Shenmue III continues Ryo and Shenhua's journey together as they traverse farther into enemy territory, uncovering new mysteries and bringing them closer to their destiny.

Will the mystery of the mirrors be revealed? How is Ryo’s father connected to all of this? Will Ryo track down the Chi You Men cartel and face Lan Di in a final showdown?

Shenmue III is said to have familiar elements to past titles in the series, and new fight mechanics. If Kickstarter stretch goals are met, the game will feature a Rapport System and a Skill Tree System. Technique Scrolls will play an important role in the game, and will be obtained through mini-games, betting games, and shops. Technique Scrolls will be instantly mastered, meaning unlike past games, practice will not be necessary.

Quick-time event (QTE) sequences will return. In an interview with Famitsu, Suzuki elaborated on how QTE will work in the game saying “I’d like to present a new QTE. Something elaborate, yet easily playable by just about anyone. Instead of simply winning by pressing buttons in a timely manner, I’d like to make something that will have people win fights by making correct judgements.”

Three areas of the game have been revealed: Baisha, Choubu and Bailu Village. The inclusion and size of these areas are dependent on Kickstarter stretch goals being met. On the subject of an open world, Suzuki had this to say: “Everyone must be thinking that we’ll expand the open world more, but I’ve been deeply questioning whether or not to do that instead. If we were to have 100 characters and split the budget among them, we’d be limited in terms of what we could do with each one; however, if we were to split that budget among just 10 characters, we could do a lot more with them. For example, we could set a parameter for Ling Shen Hua, then we could have it change her attitude depending on the conversations, or the way one proceeds through quests. Of course, that doesn’t mean that it won’t be an open world game. A stretch goal on Kickstarter will determine the expansion of the city.”[24]

It is unknown if the game will have English dubbing. The game's reveal video features a scenario with English voices, however this may be only for presentation purposes. Japanese voice acting is confirmed as the Japanese voice actor for Ryo Hazuki, Masaya Matsukaze, is listed in the production credits. The game will feature English, German, French, Spanish and Italian subtitles.

The high production costs and repeated delays of Shenmue and Shenmue II meant that a third Shenmue game for the Sega Dreamcast was never officially announced. Having originally been envisioned as a single product, Shenmue was split in two during 1999[25], and while Yu Suzuki had plans for sequels, it is not thought any significant amount of post-planning work was made on (what became) a "part 3". Nevertheless, 11 and later 16[26] chapters of the Shenmue saga had been outlined, and while the number was reduced to 7 prior to the first game's launch[27], Shenmue II ended on a cliffhanger, suggesting more was to come.

Ultimately financial issues, internal restructuring (including the 2004 merge with Sammy) and a shift in focus away from console hardware development led to any Shenmue III projects being cancelled. No Shenmue product had ever recouped its production costs, and when the Xbox port of Shenmue II again sold less than hoped, it can be assumed Sega were not keen in persuing any Shenmue-related projects in the near future. Yu Suzuki's time was instead spent on Virtua Fighter 4 and OutRun 2, before forming DigitalRex in 2003. 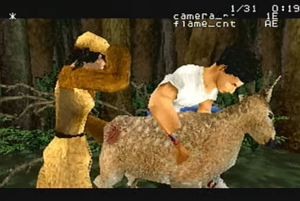 When footage of the Sega Saturn build of Shenmue emerged on the internet, some scenes are present which do not occur in either Shenmue nor Shenmue II, suggesting they may have been desgined for Shenmue III. Aside from this, no information about a third game was ever released to the public, other than vague statements about it possibly appearing on the Xbox console at some point. Yu Suzuki's departure from Sega in 2009 seemed to confirm that the game would never be made, as Sega continued to own the intellectual property rights and only Yu Suzuki was thought to have a clear vision for the franchises' future.

Over the years, Suzuki continued to speculate on what Shenmue III would contain. In 2014, Suzuki stated that III would likely not be the last Shenmue game, ideally wanting to end with "Shenmue V" but more likely ending with part 4[28].

After many years of silence, Sony Computer Entertainment of America's VP of Publisher & Developer Relations, Adam Boyes walked onto the stage of Sony's E3 2015 press conference and announced, to a very surprised audience, that Shenmue III was in development. The game was to be partially funded via crowdfunding website Kickstarter, and following an announcement trailer, Boyes was joined on stage by Yu Suzuki, and the two counted down to the Kickstarter's launch. Suzuki then addressed the audience, saying "Today is very exciting, I hope we can make Shenmue III for all the fans. Thank you so much."