Twin Cobra, known in Japan as Kyuukyoku Tiger (究極タイガー), is a Sega Mega Drive vertical shoot-'em-up developed by GRC. A port of the titular 1987 Toaplan arcade game Twin Cobra, it was first published in Japan by Treco in Feburary 1991[1], and was later brought to the United States by Sega of America four months later.[4][5] Some time later, it was also also published in Brazil by Tec Toy.

The game is a military-themed vertical shoot-'em-up in which players take control of the titular attack helicopter through ten increasingly difficult levels, each with a boss at the end that must be fought before progressing any further, in order to defeat an assortment of military enemy forces like tanks, battleships, and artillery as the main objective. Players control the craft over a constantly scrolling background, and the scenery never stops moving until a helipad is reached.

The Twin Cobra is moved in any direction using the D-Pad. The playable area is somewhat wider than the screen, so moving to the left and right sides of the screen scrolls the view sideways slightly. The Twin Cobra fires its primary weapon with

, which can be held for rapid-fire (though using a rapid-fire controller can be faster). This weapon has unlimited ammunition and can be powered up by collecting items. It is additionally armed with a limited supply of bombs, which are dropped with

. These bombs have a large radius and do high damage, in addition to absorbing all bullets while the explosion lasts. There is a small delay between dropping the bomb and the bomb detonating.

The Twin Cobra is destroyed if it takes damage from an enemy, and it respawns at a predetermined checkpoint, with the starting weapon at baseline strength and with the starting complement of three bombs. The game ends if the player runs out of lives, but it can be continued as long as there are credits remaining. The player earns an extra life at 70,000 and 200,000 points. This can be changed to 50,000 and 150,000 points or to 10,000 points only in the options, as well as changing the starting lives to 3, 4, or 5. There are eight selectable difficulty levels (Easy A, B, C, and D and Hard A, B, C, and D), which affects the number of credits given.

After completing the last stage, as with previous titles from Toaplan, the game begins again with the second loop, increasing in difficulty.

The game was also ported to the NES, FM Towns, and PlayStation. The PlayStation port, part of Toaplan Shooting Battle Vol.1, is the most faithful port.

A boss in Namco's shoot-'em-up Dangerous Seed is called "Ultimate Tiger", which is a direct translation of the Japanese name of Twin Cobra. This could be a deliberate reference.

By default, the Mega Drive port of Twin Cobra is harder than its arcade counterpart, but this difficulty it can be adjusted in the options menu. Its overall presentation (complete with the "insert coin screen"), gameplay, levels layout and enemy patterns are faithful to the arcade original, unlike a rival PC Engine version which stripped its gameplay down and offers simplified presentation and stage design.

The Mega Drive Twin Cobra has a very simplistic way of handling colour, choosing a 64 colour palette at the start of the game and sticking with it regardless of what is happening on screen. This leads to some curious design choices, such as the tanks in stage 1 being bright yellow, as their palette is shared with explosions. On top of this, 16 of those colours are reserved for hit confirmation effects (yellow/red flashing when hitting an enemy), giving even less choice for stages and objects.

The helicopter in all home versions of the game is grey as opposed to the original red colour scheme. There is also some noticeable load times before boss fights

This Mega Drive variant of the game is slightly misleading. The name "Twin Cobra" (or Twin Cobra: Desert Attack Helicopter as listed on the packaging) originates from the localised arcade name for Kyuukyoku Tiger, but the "twin" implies "two", when it is in fact only a one-player game. In Japan, the arcade Kyuukyoku Tiger was originally released in a single-player only-form - a product which did not make it to the US, but is what this Mega Drive port is derived from.

In Brazil, this was partially rectified by simply calling the game Desert Attack Helicopter on its packaging, though it uses the Twin Cobra name in-game. 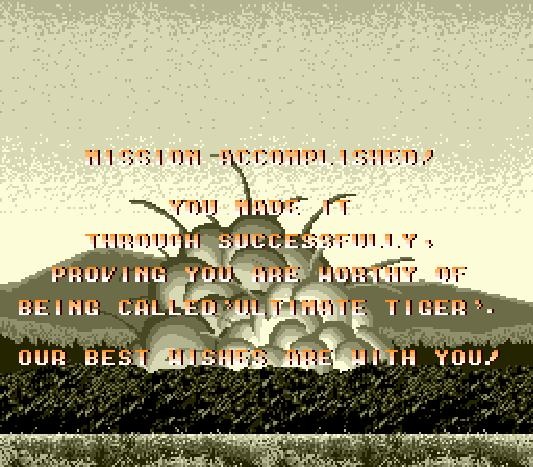