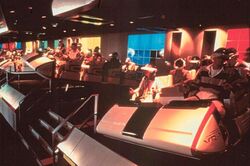 Initial reviews of Yokohama Joypolis appear to have been mixed to positive, with several praising the innovation of VR-1's Mega Visor Display headsets.[9] After the launch, Sega took advantage of the venue's large size and capacity for organised events to hold numerous examples of them, including notable Virtua Fighter and Sega Rally Championship tournaments; these officially-held events were communicated through magazines handed out inside of the park like SegaJack, and would become a key aspect of subsequent Joypolis centres. A Skate GSJ skateboarding meet was also held at the park in the following months.[10]

Although initial returns from the park are thought to have surpassed expectations, with claims made that it made roughly ¥4 billion[11] and attracted 1.75 million visitors in its first year of operations,[12] its flagship status was later superseded by Tokyo Joypolis in 1996, and the venue subsequently struggled to create similar numbers. One factor attributed to this was the fact that the park, situated away from the central districts of Yokohama, was a fifteen-minute walk from the nearest subway station, something which was later rectified in 2004.[13]

After a period of downtime, Yokohama Joypolis reopened the following year on 25 July,[14] with its ground floor level undergoing a partial refurbishment in the process. Under the new name of Joypolis H. Factory Yokohama, its operations were now assisted by media personality and businessman Hiromi Konzo, who at the time was developing several sports-themed leisure centres in Japan. A small number of new leisure attractions, such as go-kart tracks,[15] were added to support the main Sega-developed examples in place since 1994, which had since received software and theming updates.

Yokohama Joypolis closed permanently at the end of February 2001,[16] changing admission fees to ¥15 and ¥10 to scrap payments for its attractions and arcade machines in its final weeks.[17] The closure occurred in the midst of a restructuring at Sega, which led to several other Joypolis venues going defunct, a scrapping of the plans for 100 theme parks across the world, and the eventual discontinuation of the Amusement Theme Park concept, with managerial problems and cashflow issues cited.[18] Whilst some of its auxiliary facilities continued trading,[19] the space the main building formerly occupied subsequently became warehouse storage, and its former grounds have more recently been redeveloped to house a block of flats.[20]

Yokohama Joypolis was themed around a conceptual story involving a fictional professor, "Dr. Chrono", and the "B.U.R.P." (Basic Universal Reflector Prism),[21] a device which, in its physical form, involved the escalators linking the floors of the centre together.[22] "Dr Chrono" was first used for Osaka ATC Galbo and would go on to feature in the other two Galbo locations, though subsequent theme parks opened by Sega would abandon the concept.